After reading in the newspaper a few weeks ago about a German couple who had to be rescued, along with their guide, from their hike between Bang Pae waterfall and Ton Sai waterfall, I figured it’s about time I go complete this trail and see how hard it is to follow.
I’ve been up in that area many times when I was bushwhacking my own trail, The Phuket High Route Trail, and crossed this existing nature trail and even followed it for a hundred meters or so in my 5 1/2 year quest of hacking a trail the length of Phuket.

They decided on Bang Pae since many kids were going along and they always enjoy seeing the monkeys caged up at the rehab center.

I am not as amused or entertained as much by these apes as I was attacked by one, a few years back, while hacking my high route trail.  You can read about it here.

Anyway, we got to the park about 3 PM, which was a little late perhaps for an out and back attempt of the full nature trail.  I didn’t really know exactly how long it was but knew from my experience in the nearby mountains that it couldn’t be further than 5 or 6 kms one way.    Since I am a fairly confident in my abilities, and had my handheld Garmin GPS with me, with my trail on it along with some nearby way-points, that I understood, I set out anyway.

The first 300 meters or so, you follow a well worn path up to the waterfall.  Since it was a Saturday, many kids were swimming in the pools along the way, with family picnics enjoying the cool air.   My family likes to cook in a barbecue grill, so set up at a picnic table near to the parking lot at the bottom.

Leaving the largest waterfall, the path gets slightly smaller and there are a few small paths off of it, going down to the stream that feeds the waterfall.  Ignoring those, I stayed on what seemed to be the largest path.
Before the 1st km was past me, I ran into a group of about 5 or 6 people who looked a little tired and like they had been out there a few hours.  I asked where they came from and they said they also did the whole trail and went all the way to Ton Sai and now were coming back.   I asked how long it took and they said 7 hours! 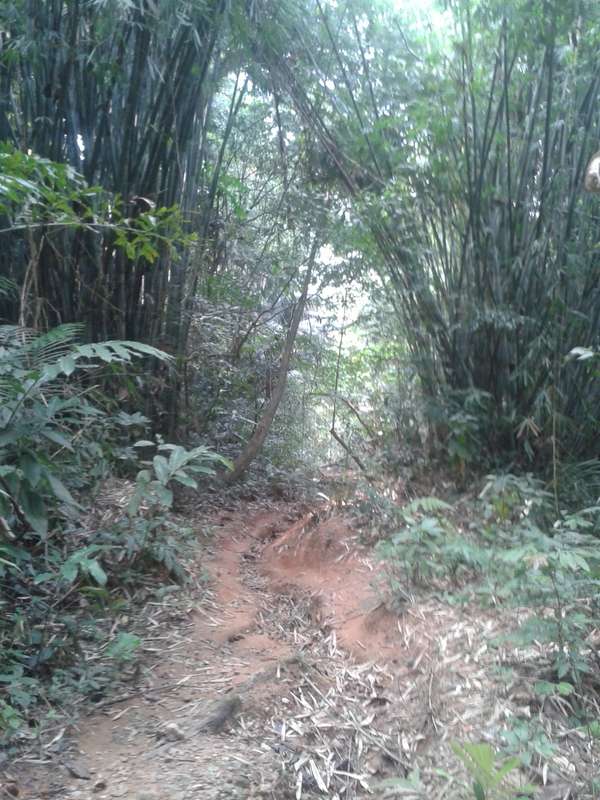 Since I only had about 4 hours of daylight left, I knew I’d have to hurry.   Then I met another man, who asked me where I was going, and when I told him, he said I wouldn’t have enough time and said “do you have a flashlight”?    I did.  And continued.

There is a beautiful swimming hole with a man made deck and some signs about the gibbons that have been released.  (by the way, I now carry pepper spray for defense against any attacks as it was one of the scariest things that’s ever happened to me when I was attacked 3 years previously).

I did lose the trail once as there are some other smaller trails in the area that the Gibbon rehabilitation people use to put food out for their relocated apes.   I personally believe that they should not be putting these gibbons so close to a public nature trail.  It is dangerous for the hikers, and not a good experience for animals that they are trying to reintroduce to the wild.   They need a much more remote area to do this properly in my opinion.

I soon figured out my error and backtracked to the main trail again and moved along at a power-hike pace, remembering there was a sunset coming up in 3 more hours or so.

Finally hit the top and started down the west side of the mountain.  I came to a big billboard pointing out the two different waterfalls with arrows.   Not too long after that, I ran into 2 couples who asked how far it was to Bang Pae.  I told them I thought it aprox 4 kms and they might not have time to go there and back.     They weren’t carrying any water anyway, so I think it was a good idea for them to head back.
Only another km after that, I reached the parking lot of Ton Sai waterfall.

I couldn’t believe my eyes, there were only 4 motorbikes there and no cars or trucks!   On a Sunday afternoon?   I guess most Thai people are working the high season tourist trade and, well, it is dry season even though both waterfalls were running nicely with water.

I bought an ice tea and drank it in about 2 minutes and headed back.
Now I reset the GPS to keep track of the exact mileage since I knew the way back now and probably wouldn’t deviate from the main trail again.

It took me exactly one hour and 1o minutes to get there, and it took me about the same to go back.  Here is a screenshot (sorry I took it with my camera in bad light), of the one way trip.

As you can see from the screenshot, I move pretty ast at 4.1 km/hr average speed and 8 max speed.  I don’t recommend that anyone (except perhaps Hash House Harriers) try to achieve this time.  Remember, the trail can fork a few times and it’s a guessing game as to which is the right way, and I didn’t rest at all.

Also, here’s a screenshot of the profile page showing altitude, the lowest point was 29 meters at the Bang Pae side.  The Ton Said (west) side was 48 meters high.  The high point is 228 meters above sea level.  (I didn’t set my altimeter for a few days so, this could be off by a few meters).

When I got back, the family and friends had just finished their dinner and saved me a large fish that they had barbecued, along with green mango salad, some Larb Moo and of course, sticky rice, and lots of it.  They were pretty amazed at how much I ate, as hiking will produce a good appetite.

The ranger was sitting with them as most of the day people were now gone.  We talked a bit about the gibbons and he pointed to a cage across the stream and told me that the one that attacked me was now caged up over there.   He didn’t do well at trying to live in Phuket’s wilderness, right on a nature trail, and after biting 3 people, they pulled him in and caged him.    I wasn’t sad to hear this news, as he was no monkey (or ape) that I ever wanted to meet again.
Thanks for reading.    fiddlehead