Living in Thailand has it’s advantages.  Oftentimes the budget airlines have incredible deals and if you catch them at the right time, you have so many choices for traveling to exotic places.
This time it was Malaysian air with a 45% off sale until the end of August (booking period, not travel period)

For $200, I could fly to KL and then on to Medan, Northern Sumatra and return!     Not bad at all, so I booked my flights as I’ve  never been to Sumatra and understood they have some of the last remaining orangutans there and organized treks to see them in the jungle.

Booked my flights, made arrangements with a company in Medan to rent a motorbike for a week and packed my bags.

When I’m trekking, I normally prefer to go without a guide.  But more and more places in the world are making it mandatory to take one.  I know this helps the local economy and you can learn more about where you are trekking by taking a guide.    But they can be expensive, can rip you off, and you are often with other trekkers who are slow, or not always easy compatible.   I prefer flexible trekking.

I chose to go to Bukit Lawang in Northern Sumatra to start my week long trip and this is one of those places where a guide is mandatory.   Bukit  Lawang is a small village on the eastern edge of Gunung Leuser National Park, and they make the rules.

When I arrived in town, a met a man (tout I would call him), who told me he has a trekking company and I could pick any one of 12 guesthouses or hotels and the night’s stay would be included in the 1,300,000 rupiah (about $90 USD) for the total trek, which included: accomodation, English speaking guide, all permit fees and registration  all food, including snacks, lunch, dinner for 2 days and camping and the raft trip back to town.
Sounded good to me as this was the aprox price I had found on the internet.

Dedi assured me there would be 2 English speaking guides and that I would join a group the next morning already consisting of 2 Canadians and 2 Germans.

That night in the restaurant, there was a bunch of locals playing guitar and singing many classic hits and quite a repertoire of music. 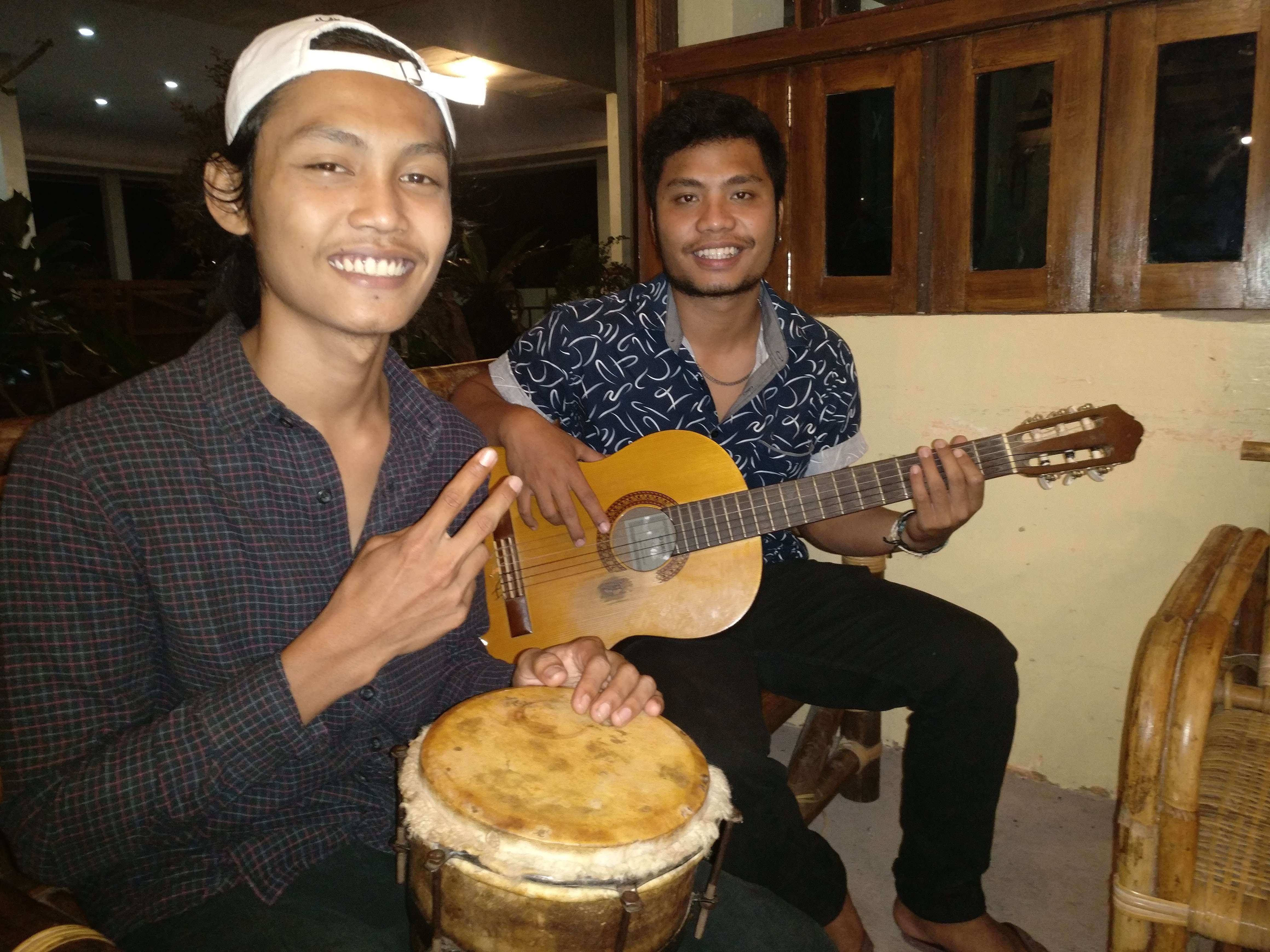 In the morning, Dedi came to my room with a young boy (so it seemed, he told me later he was 31 years old, which I find hard to believe)   and told me plans had changed and I would go alone with the new guide, named Indra and sorry but he is just learning English.    I pretty much can go with the flow but the feeling started in me that maybe I was getting ripped off a little.   I said fine and thought we would set off but he said, no, he’ll be back for you at 9 AM.     I went and had breakfast and finished packing and was ready at 9.   He showed up at 10.
OK, local time.  I can understand, living in Thailand, this is how it works sometimes.    The breakfast was great. 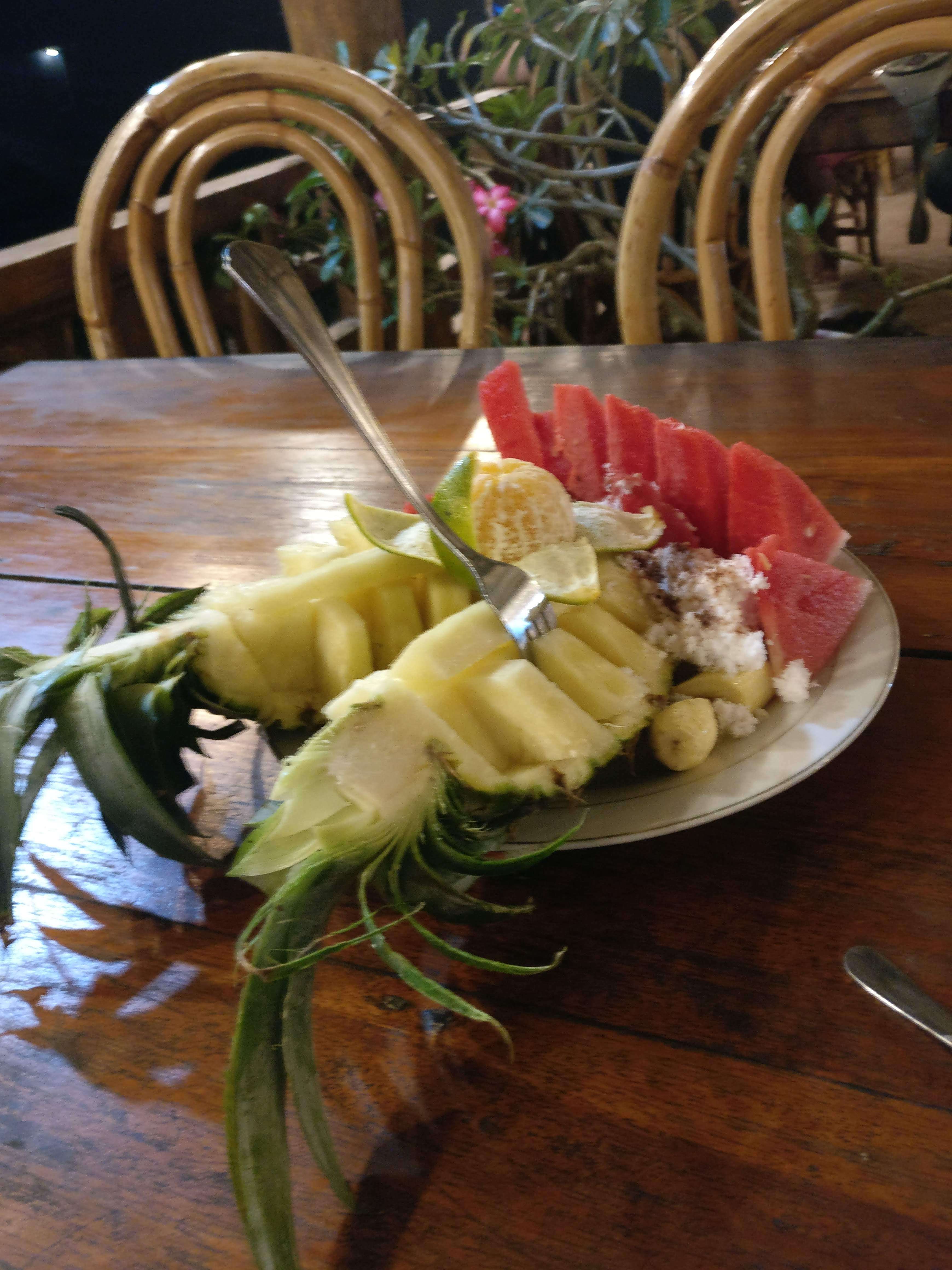 And then we set off. 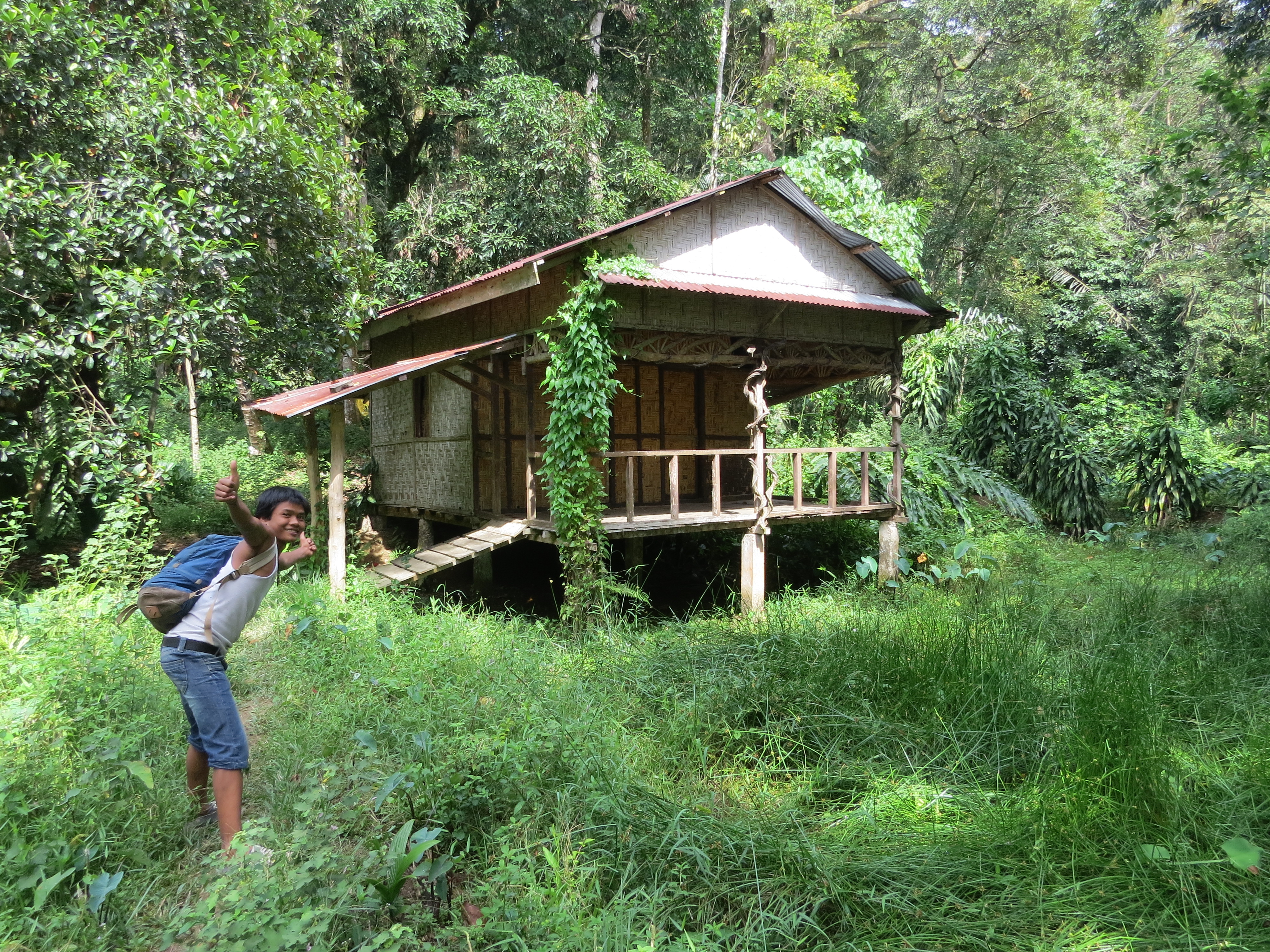 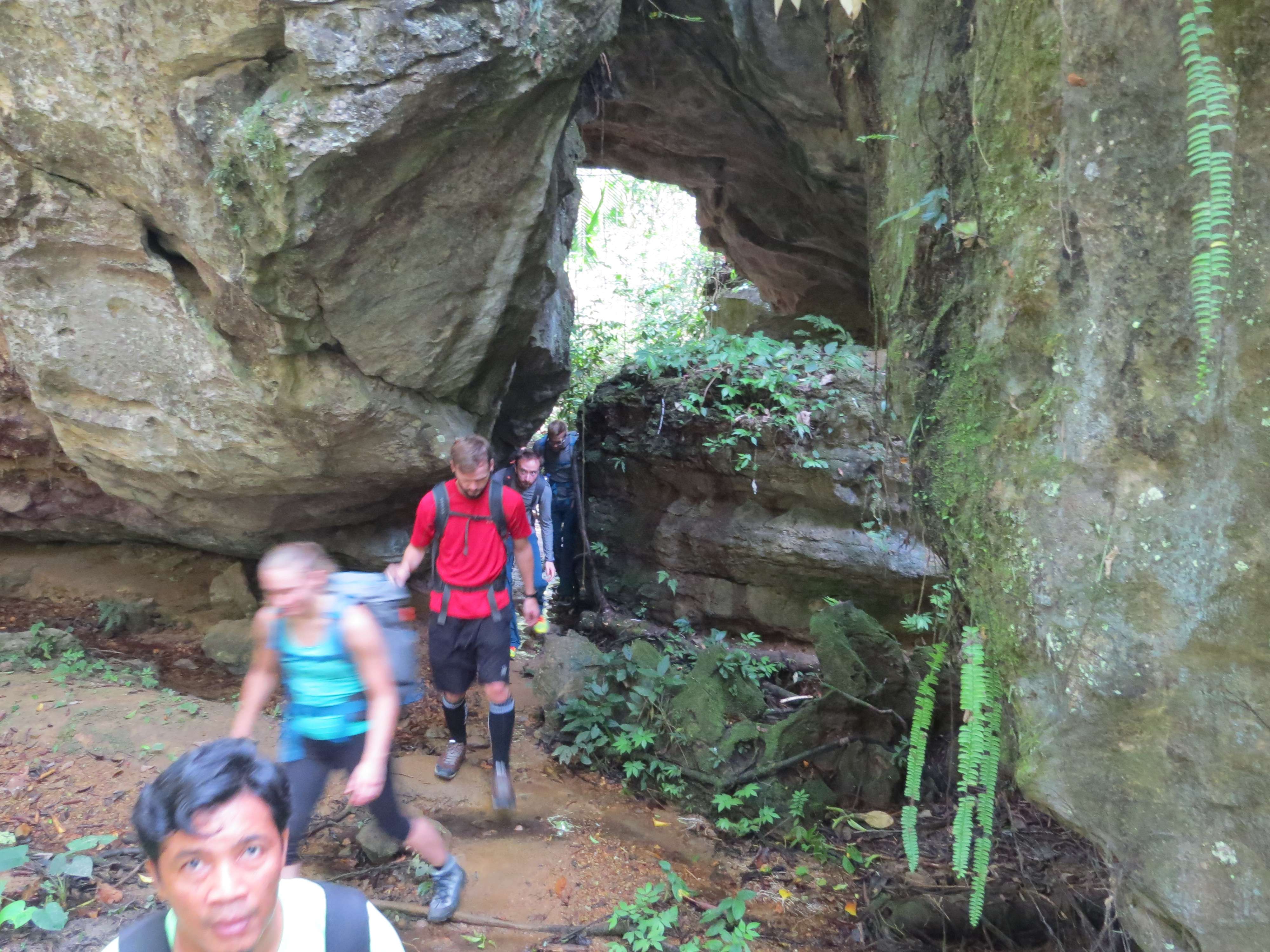 Although Indra couldn’t speak much English, he seemed a happy camper with smiling and singing along the way.      We passed some other trekkers who also were starting late and soon learned that the jugle was full of groups.   I hadn’t seen many westerners in town but now saw they were here in the jungle.

The path was good.  In fact there were many paths.  I later learned that the whole place was a maze of trails.  Most likely caused by trekkers who had orangutan or other wildlife sightings and moved off in all directions to get closer for their pictures.        And it wasn’t long before we heard some commotion and saw our first group of them. 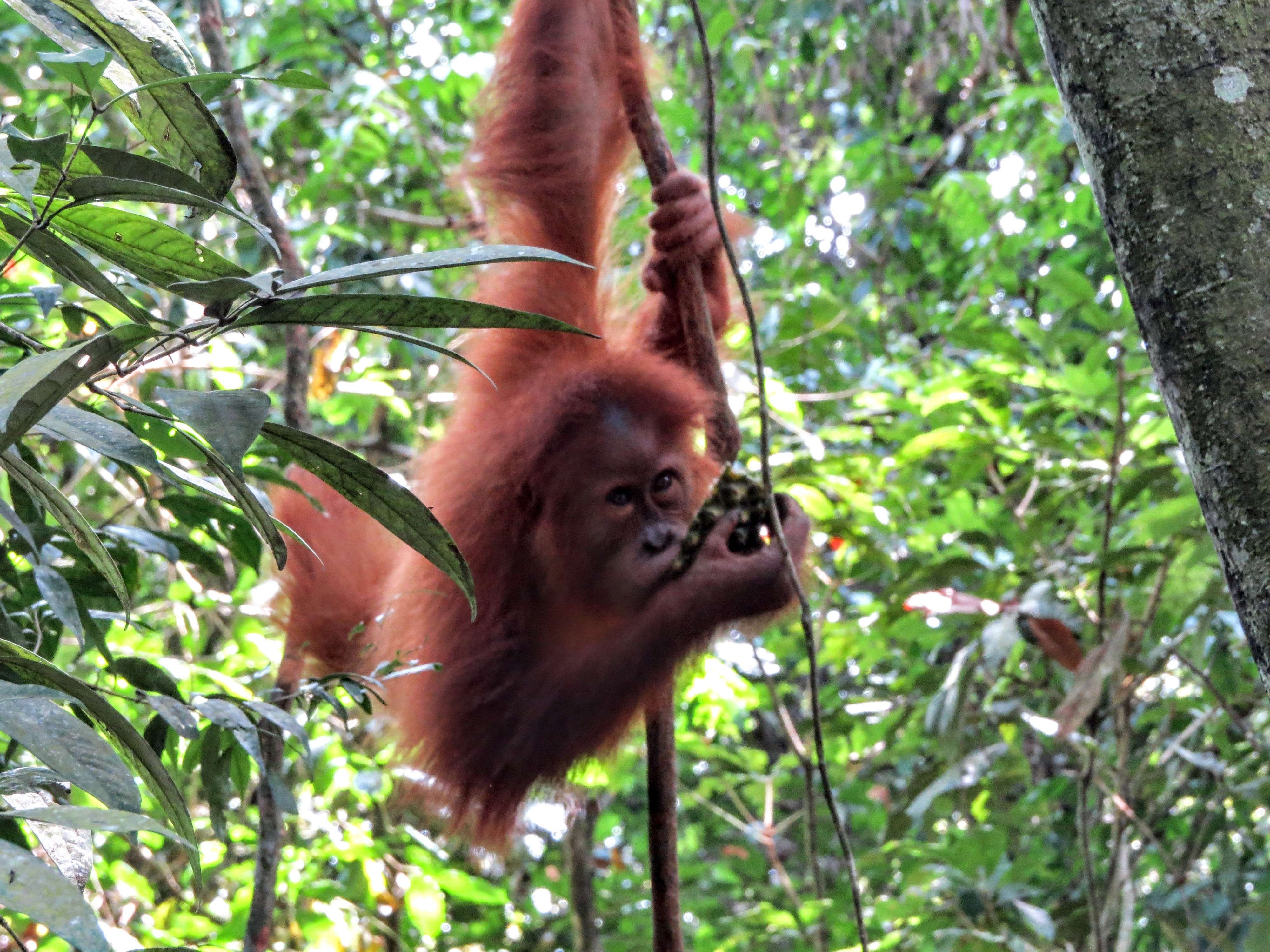 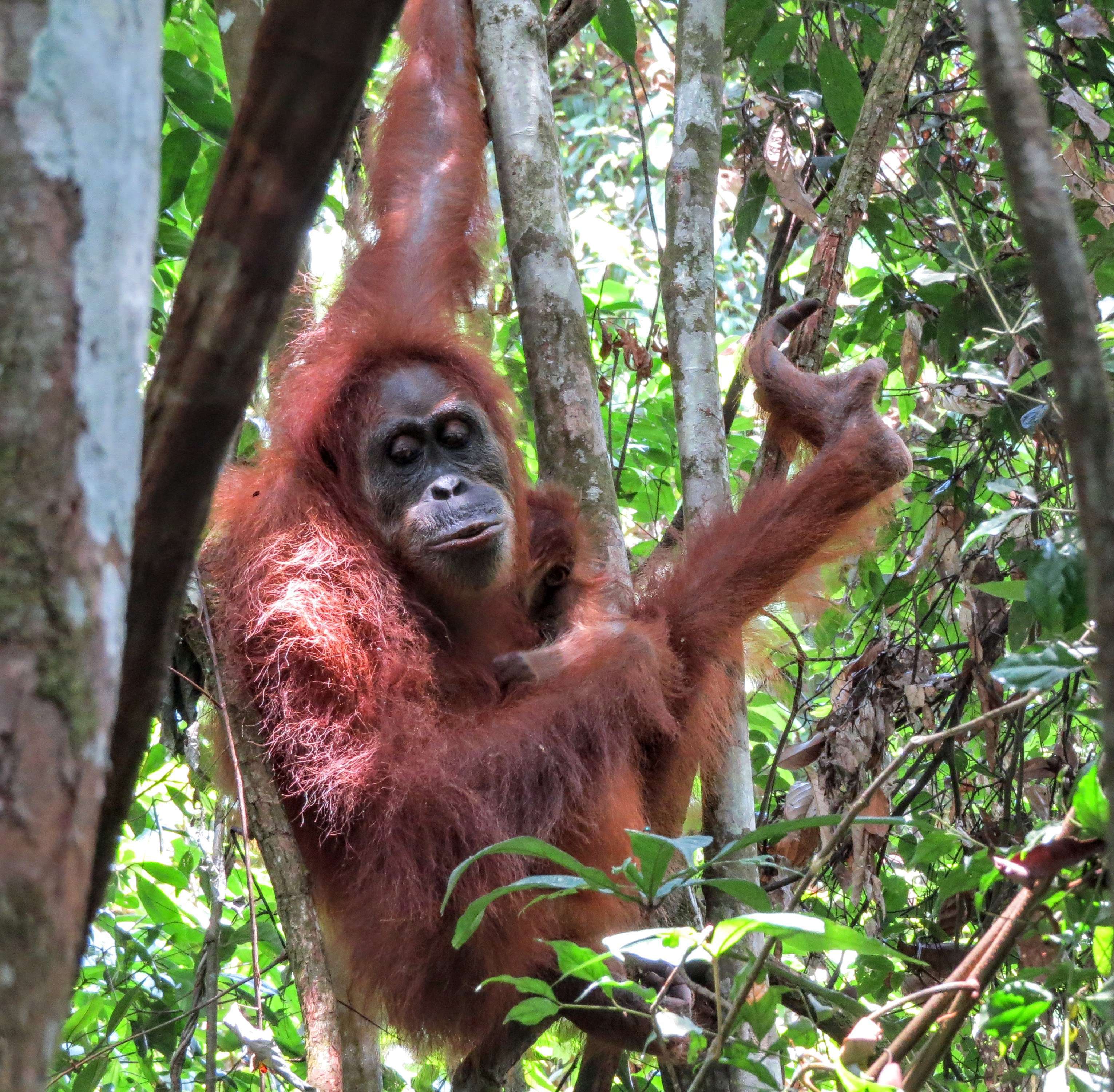 Wow, I was impressed with their size and how they didn’t seem to care that there were 20 tourists sneaking up close to get their picture.    Didn’t take too long to realize that these weren’t exactly wild animals, but almost seemed to enjoy the picture taking.      I was glad I had my big camera along with it’s great zoom capabilities as I wasn’t happy about getting too close to them.   They were BIG!    Much bigger than I had expected.

We moved on and a short while later, followed another group who had sighted a few Thomas Leaf monkeys.
Now these guys (3 of them) seemed a bit more wild and stayed at a distance.   Now the zoom lens was particularly useful. 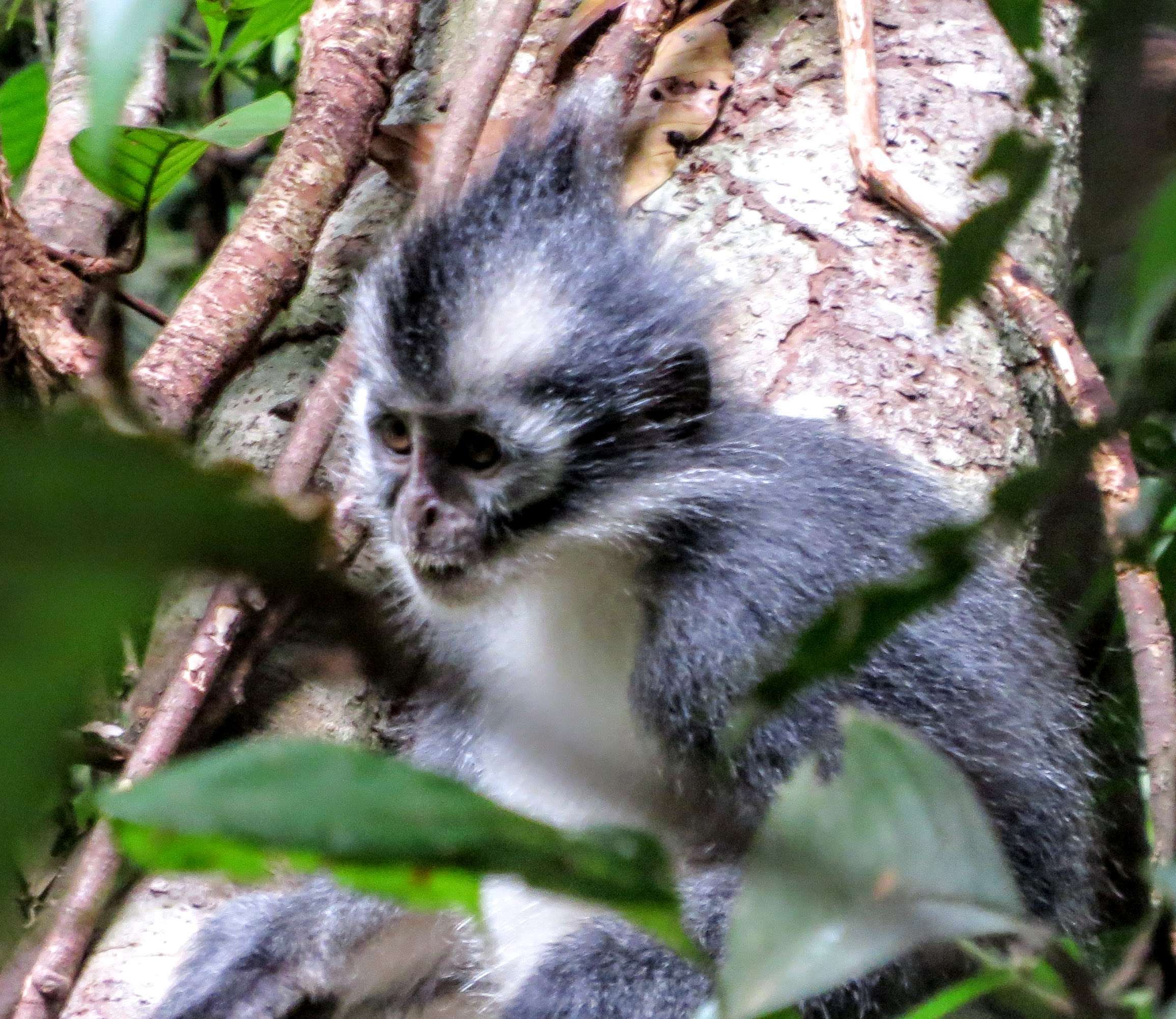 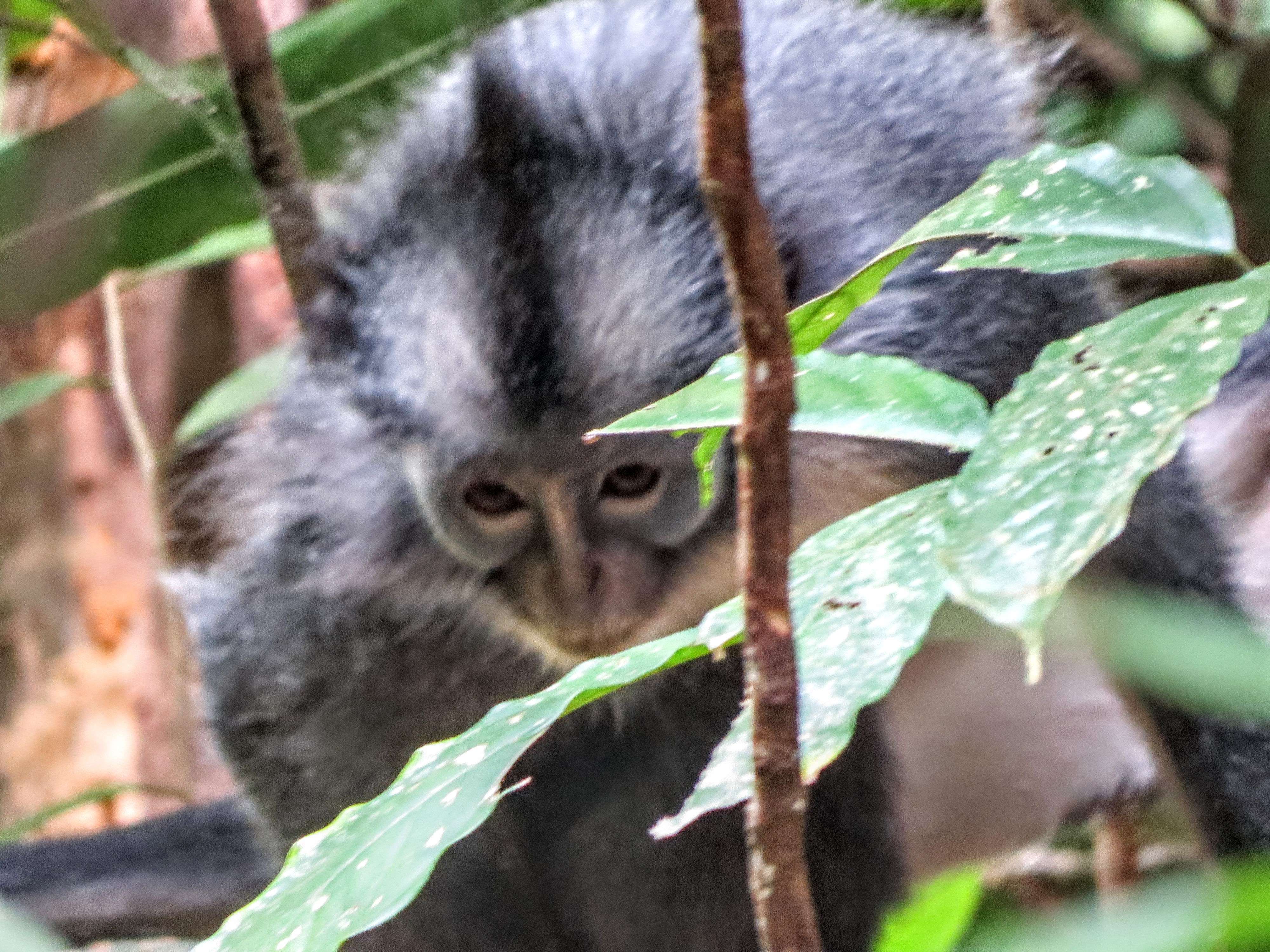 Throughout the next 2 hours or so, we saw quite a few orangutans.   About 15 in all I’d say and the best was a mother with her baby that seemed to like watermelon rinds.    We stayed in that area and I got lots of good video as well as stills. 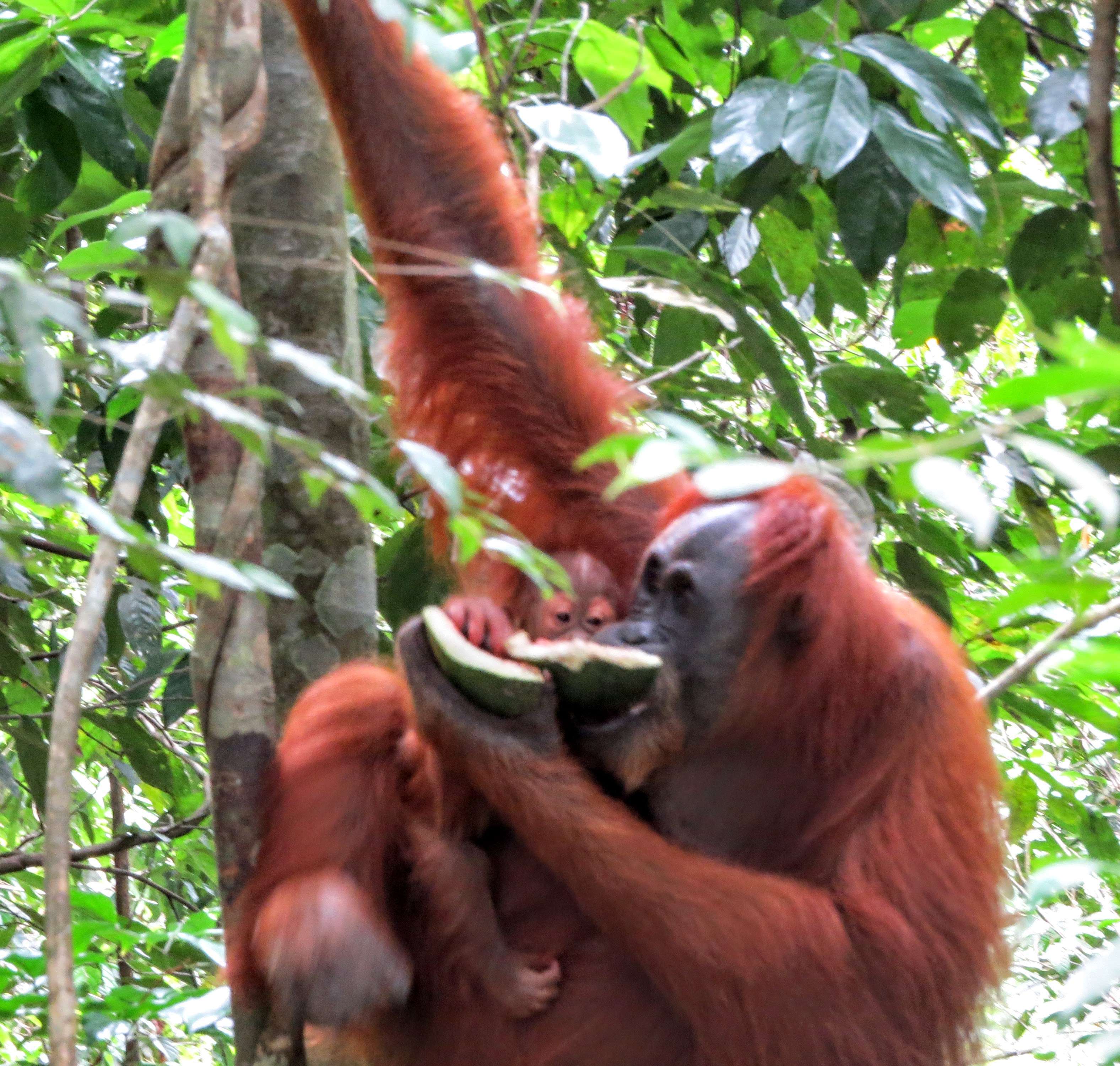 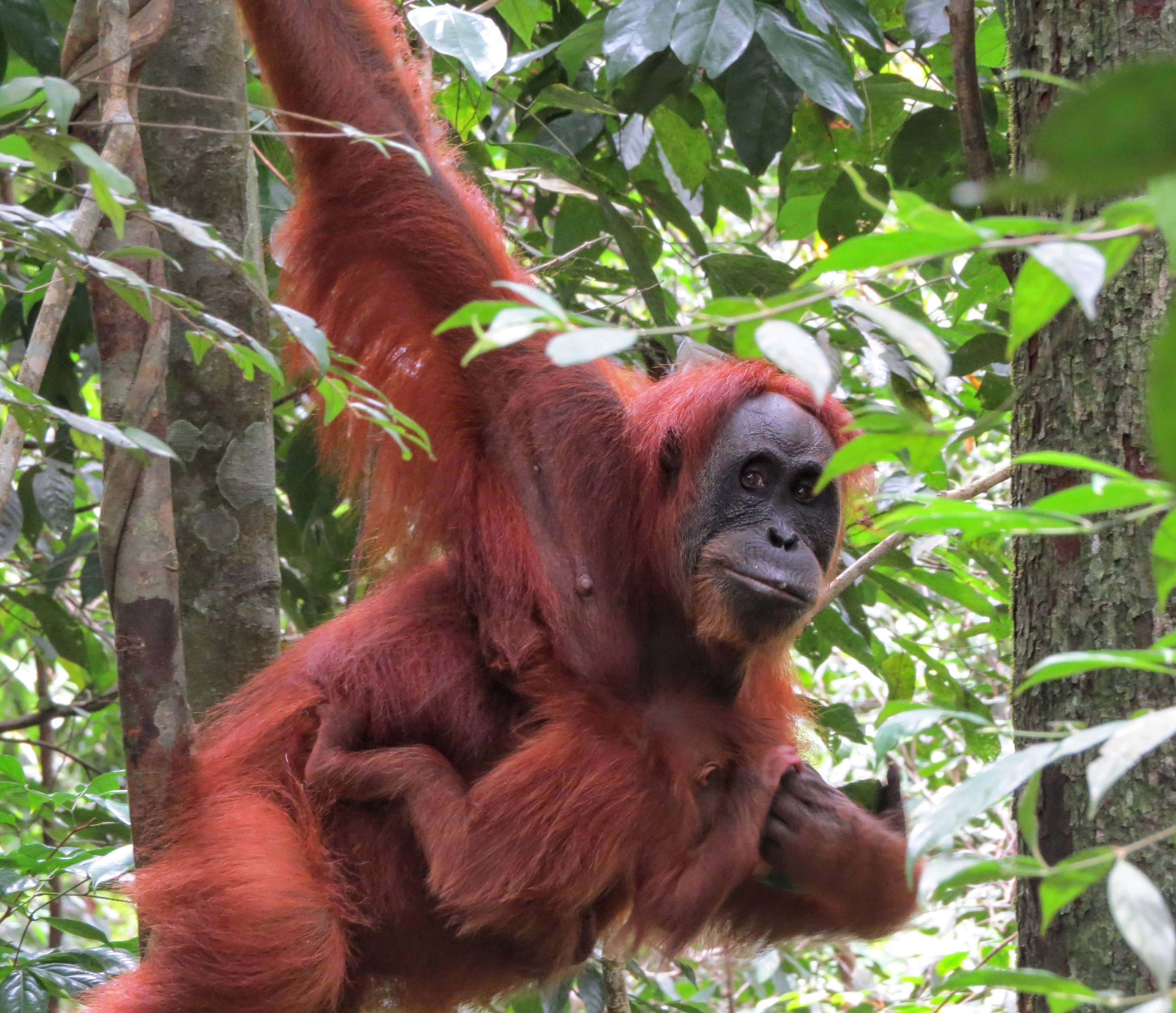 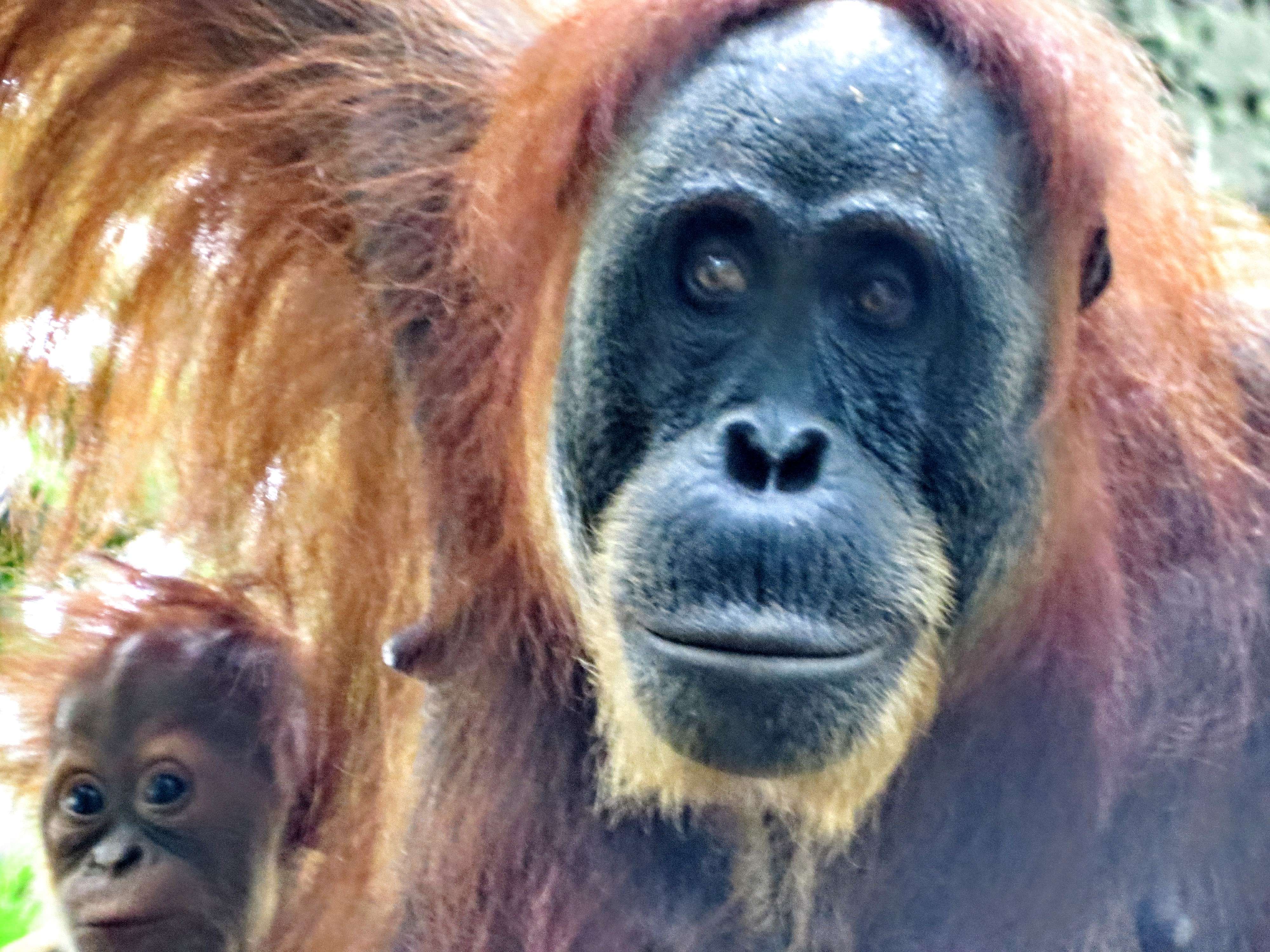 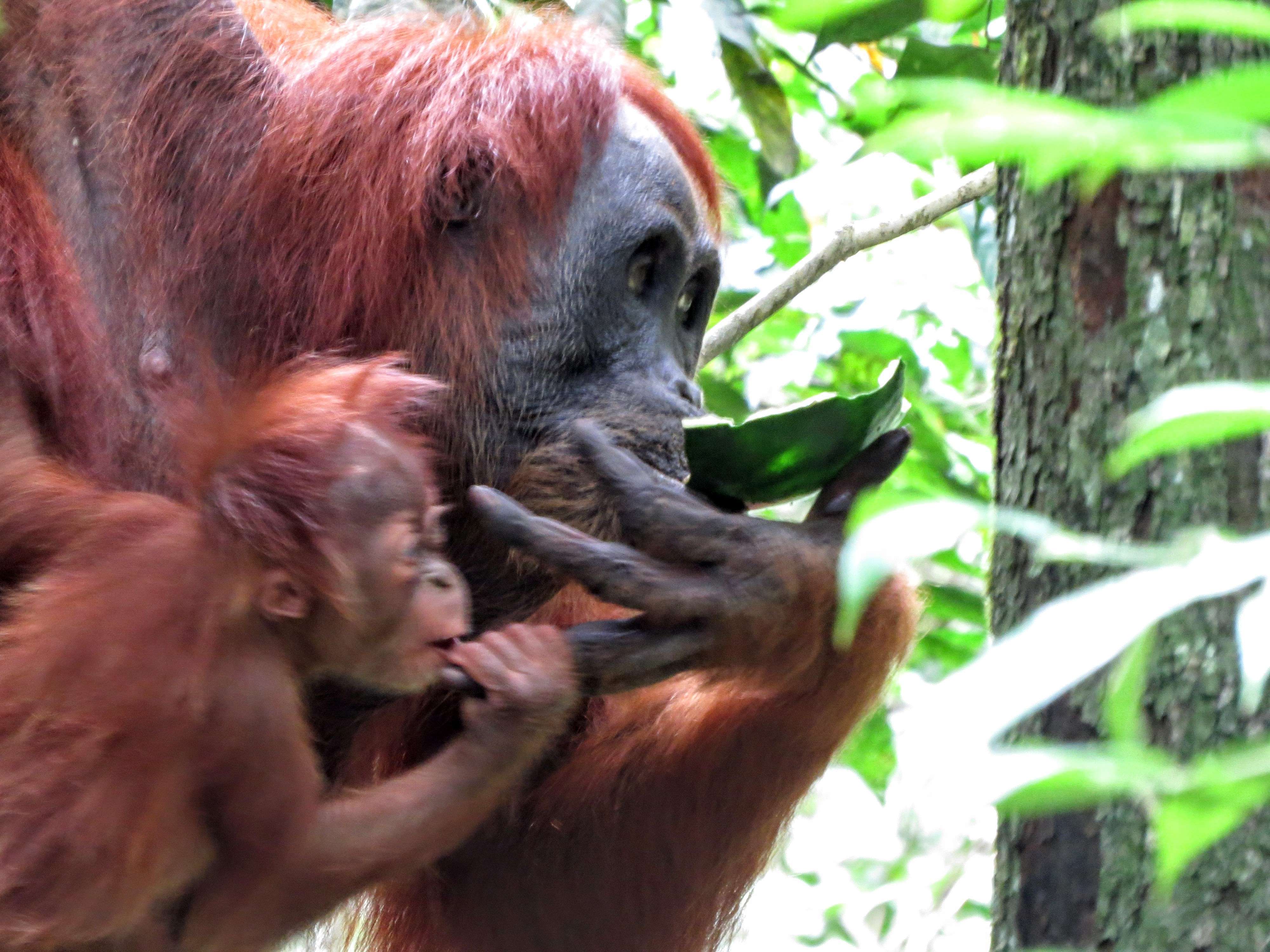 This was amazing!    They didn’t seem very afraid of us at all and actually kept coming closer.  We would move back and they were in control of the situation.  Certainly not us!

We said good bye after about 40 minutes of watching each other. 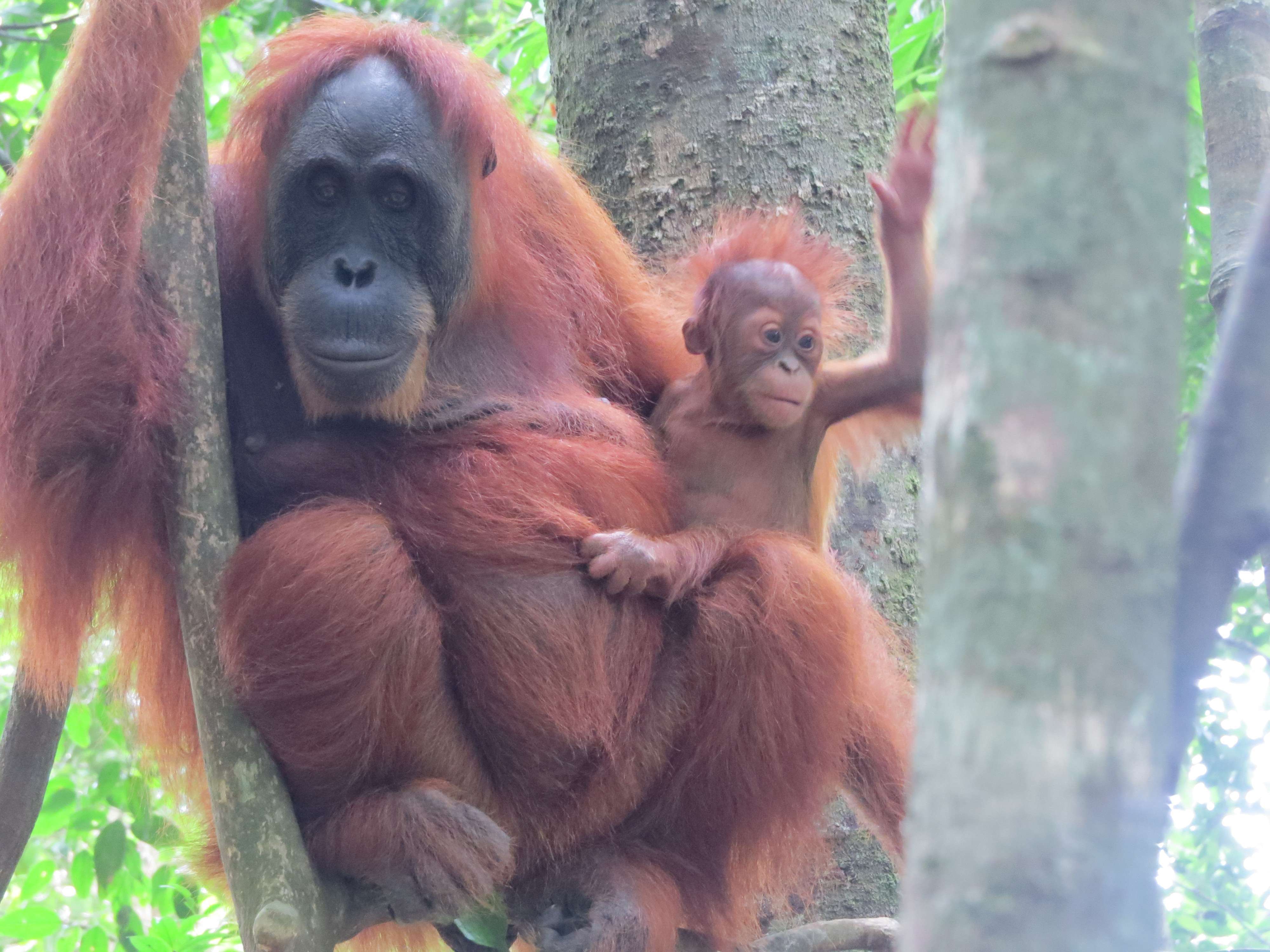 And a short while later we came across a giant peakcock.   Now I had seen peacocks before but never anything this big.   He (or she?) must have been 10′ long (3 meters) from tip of tail to head, and again, didn’t seem very afraid of us at all. 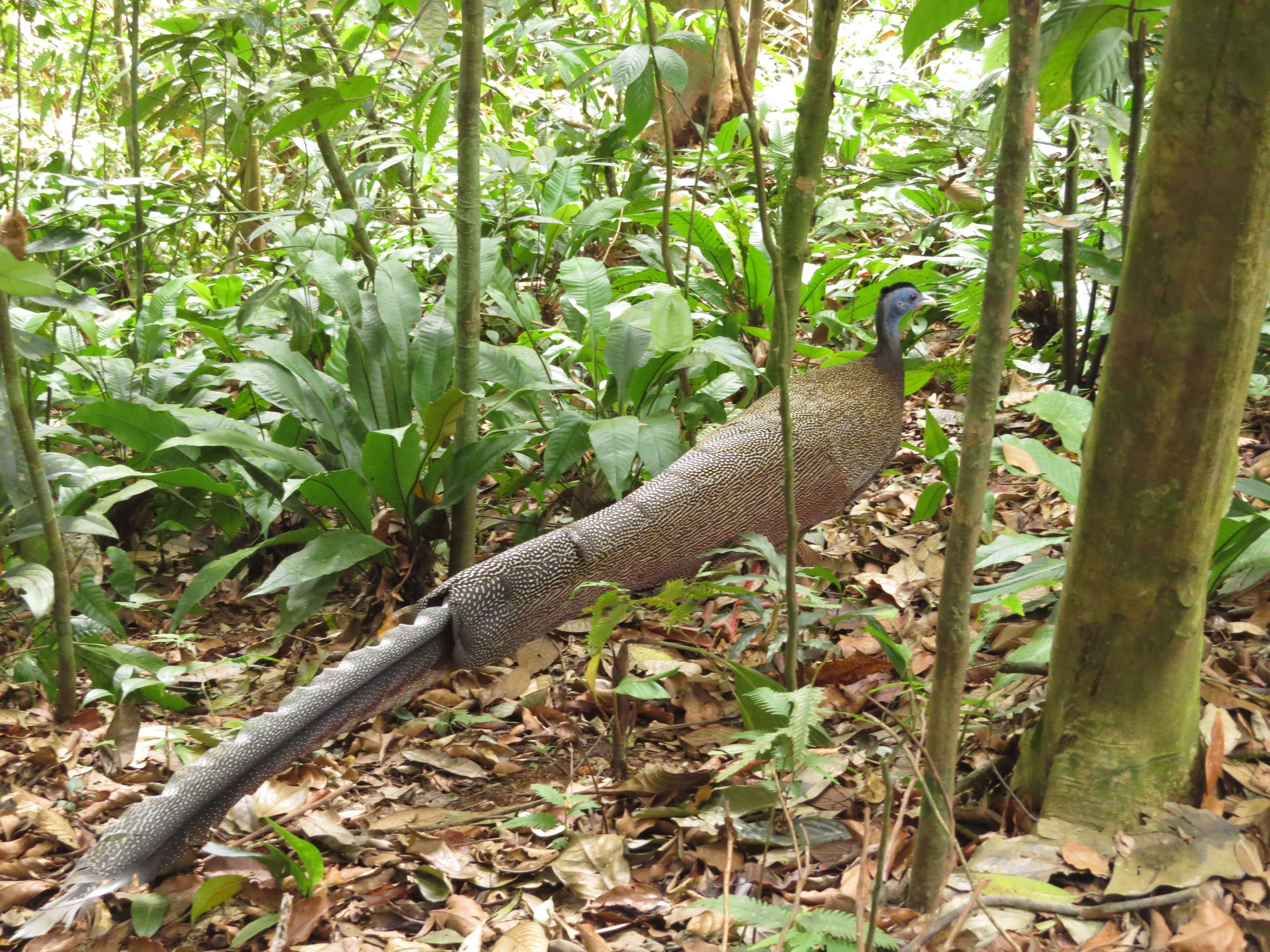 We stopped for lunch at a spot with a great view of the river far below.   I didn’t realize at the time that we would soon be descending down steeply to that river.
Once we started our steep descent, holding onto roots and going down backwards for safety, we heard some commotion and the guides were excited as we saw another group of orangutans and this time, one of them was quite young at only about 3 feet tall (one meter).  The guides got excited and said the young ones can be very aggressive.     Sure enough, it started approaching us, maybe looking for food, maybe just to see what we’d do.
Well we tried to get out of there, but there were about  7 of us and the trail was so steep here.   We went down as fast as we could but everytime I looked back, he was closer and then, this guy curled up into a wheel and started rolling down the trail!    That’s when i knew he was just playing with us and it was all fun and games to him, but scary for us. 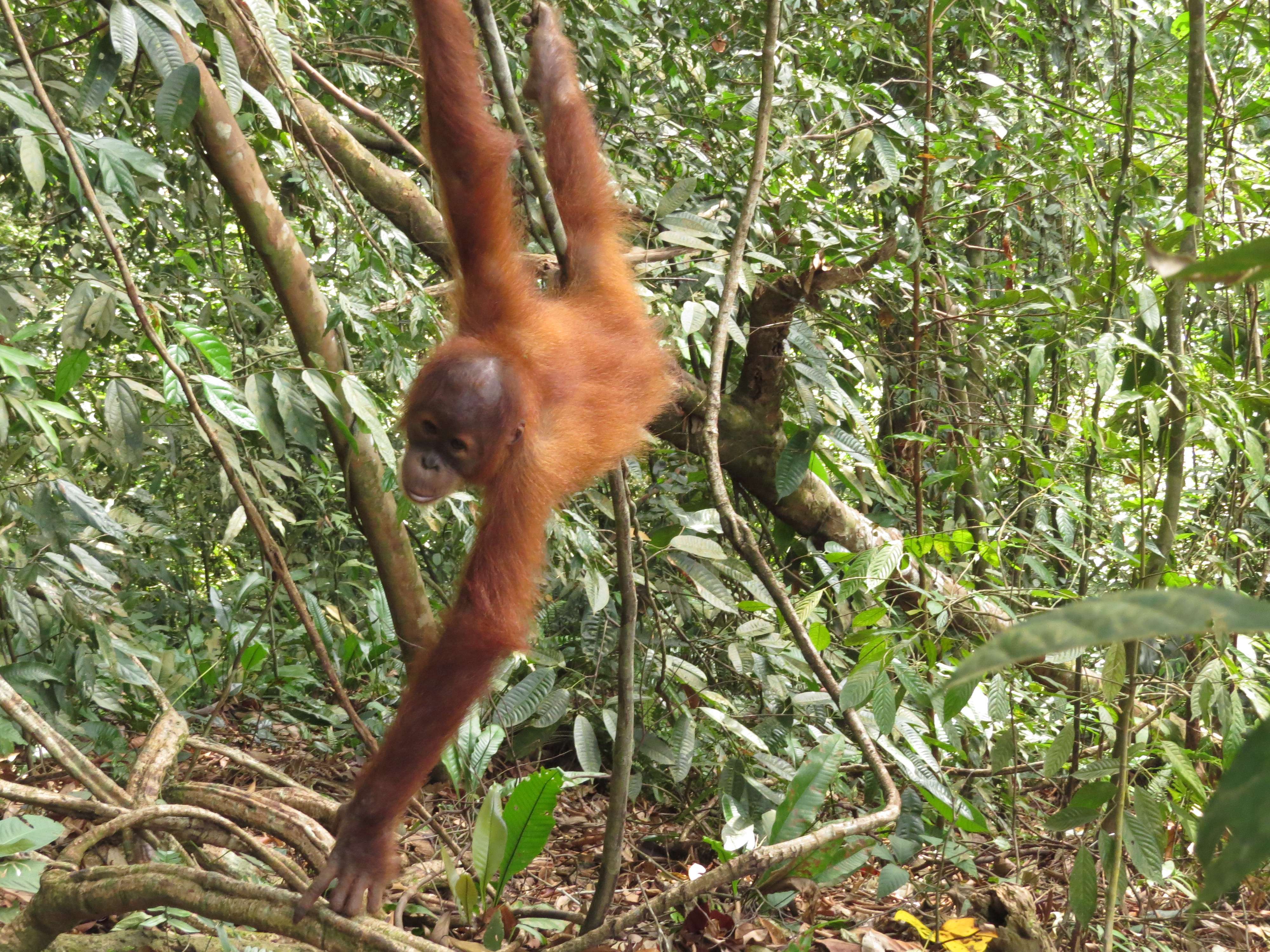 Descending as quick as we could, near the bottom, we came to a stream and then a beautiful swimming hole.
I stripped right down and jumped in for a great refreshing cooling off. 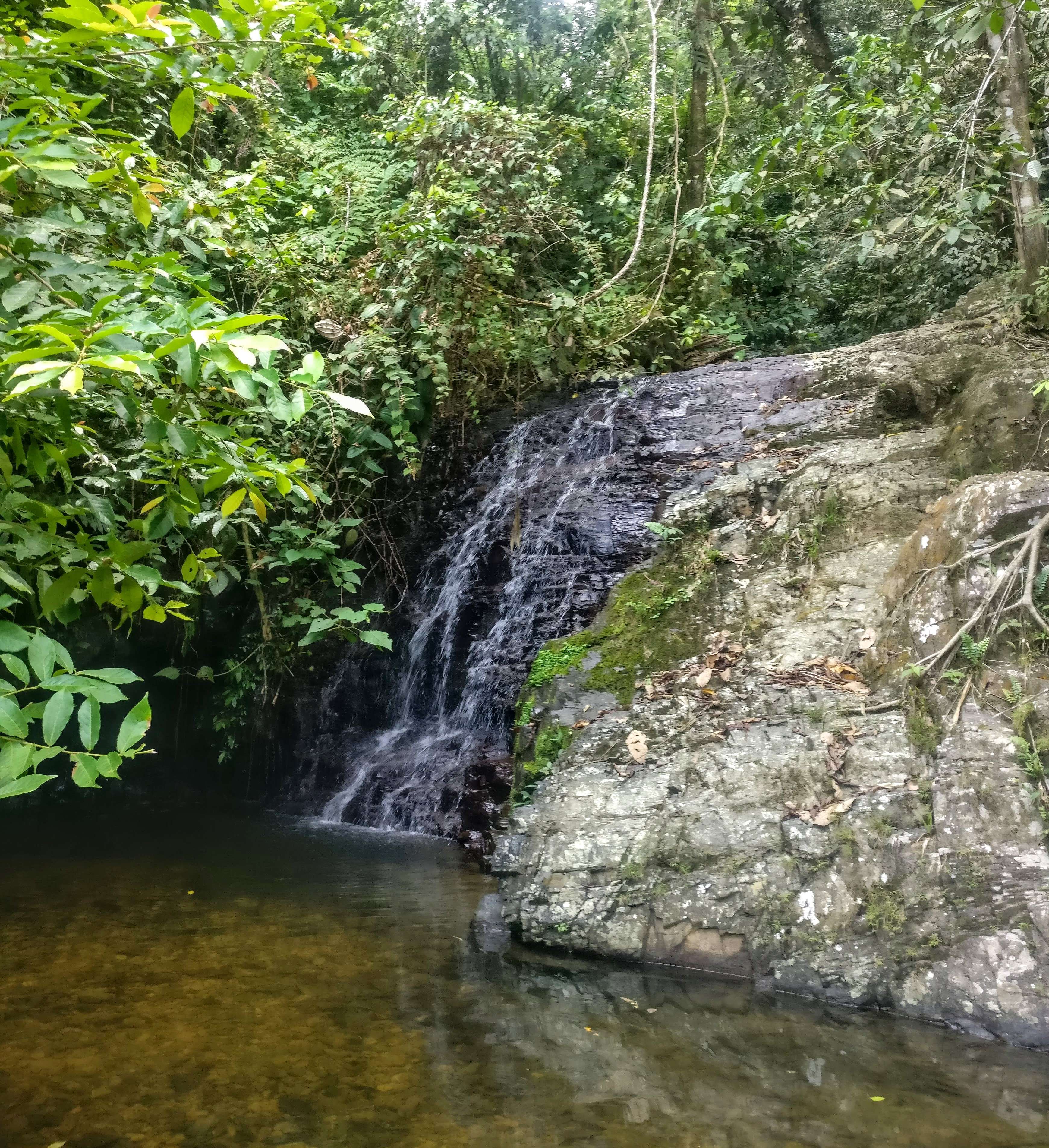 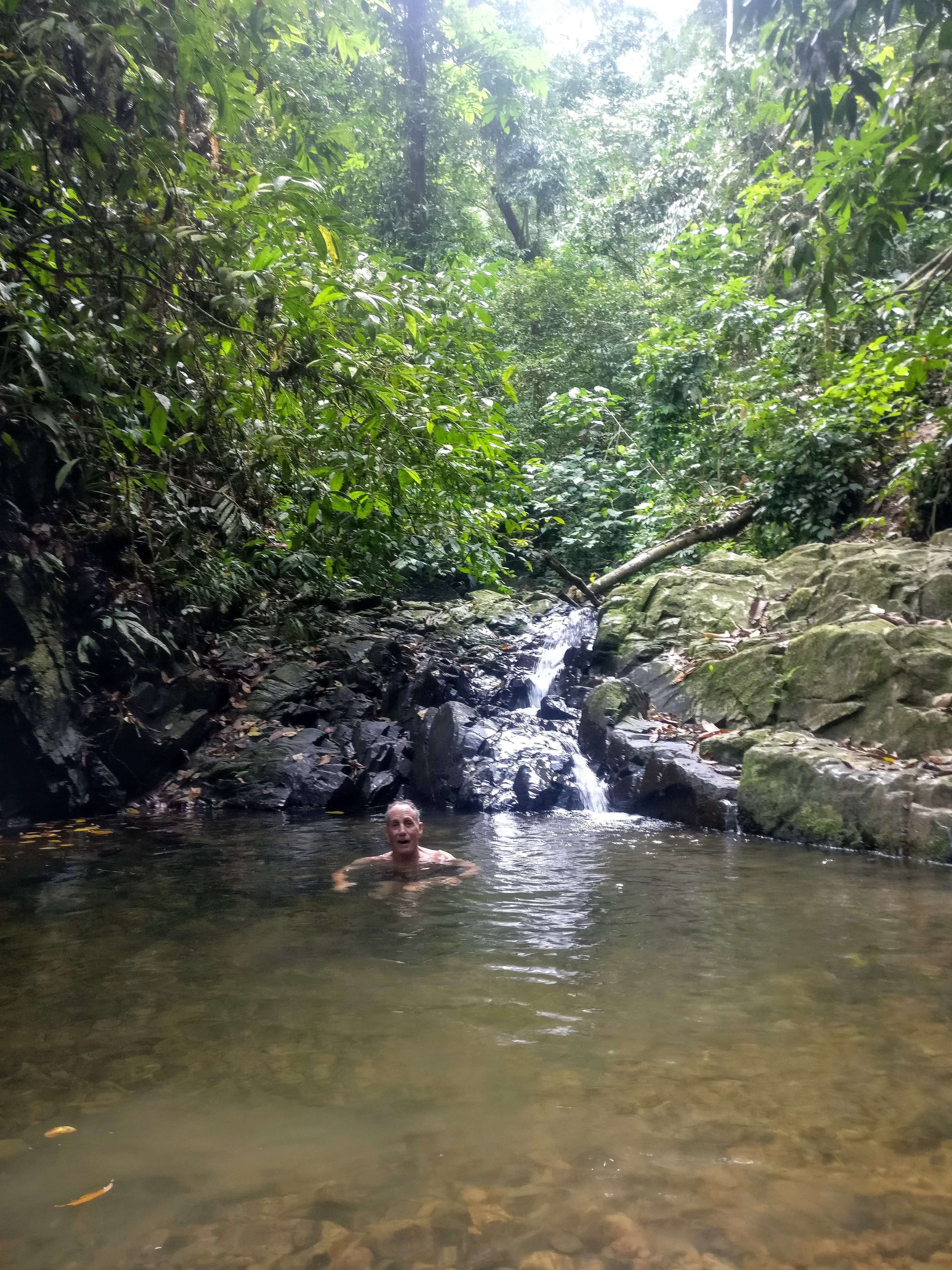 Not long after my swim and a few waterfalls on this stream, we came to a camp where the guides were cooking up some dinner.  Indra said we would sleep here tonight………. But:   Lo and behold, who shows up but Dedi!     I couldn’t believe it, but I did believe the next thing out of his mouth:  “There’s been another change in plans and you will have to cross the river and sleep at a camp just on the other side”
I asked if he was to join us and he said, no, I have to go fishing.   And he left.
Indra just smiled and we started our trip up river and our ford.    Well, our ford turned into 8 fords of this river and the river crossings were tough.   Groin deep, slippery rocks, and I tried to do it in my flip flops.  I should have worn my shoes but Indra insisted on carrying them (although he was barefoot and actually slipped once and submerged my shoes anyway!   I laughed.
We kept passing camps and finally got to the last one.   Where they were not expecting us and started yelling at Indra.  I felt bad for him but didn’t know what was going on.  Finally I asked another guide there who did speak English and he told me this was not Dedi’s camp, but we would have to stay there and they would take care of me and feed me but it was not cool because Dedi didn’t pay them to do this.
I felt bad for everyone (except Dedi of course) but must say, these guides are great and do everything to make your trek as enjoyable as possible. 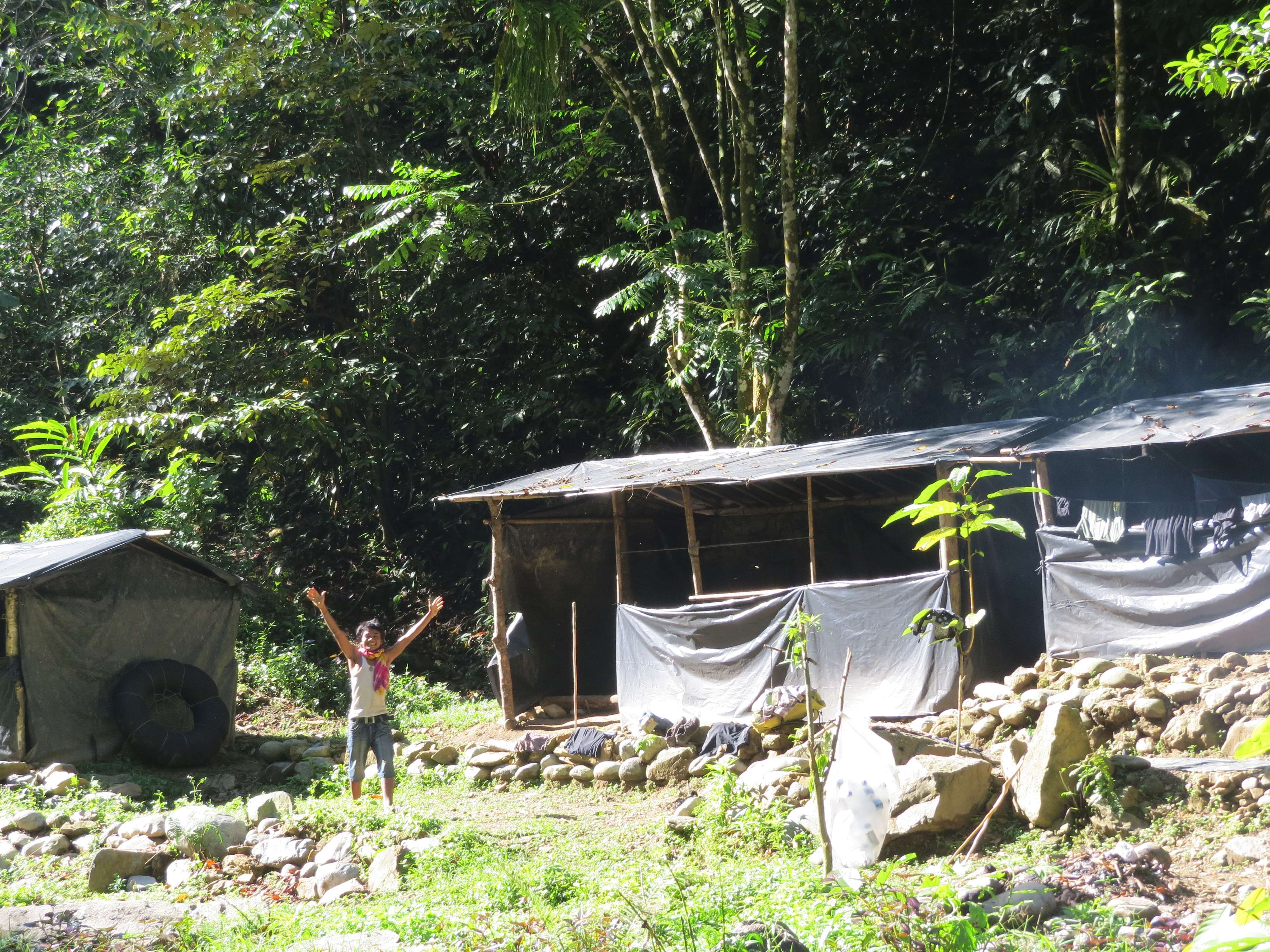 Indra set us up in one of the plastic coated bamboo huts there and we had a great meal with along with a Danish couple and great conversation about different world travels we each had done. 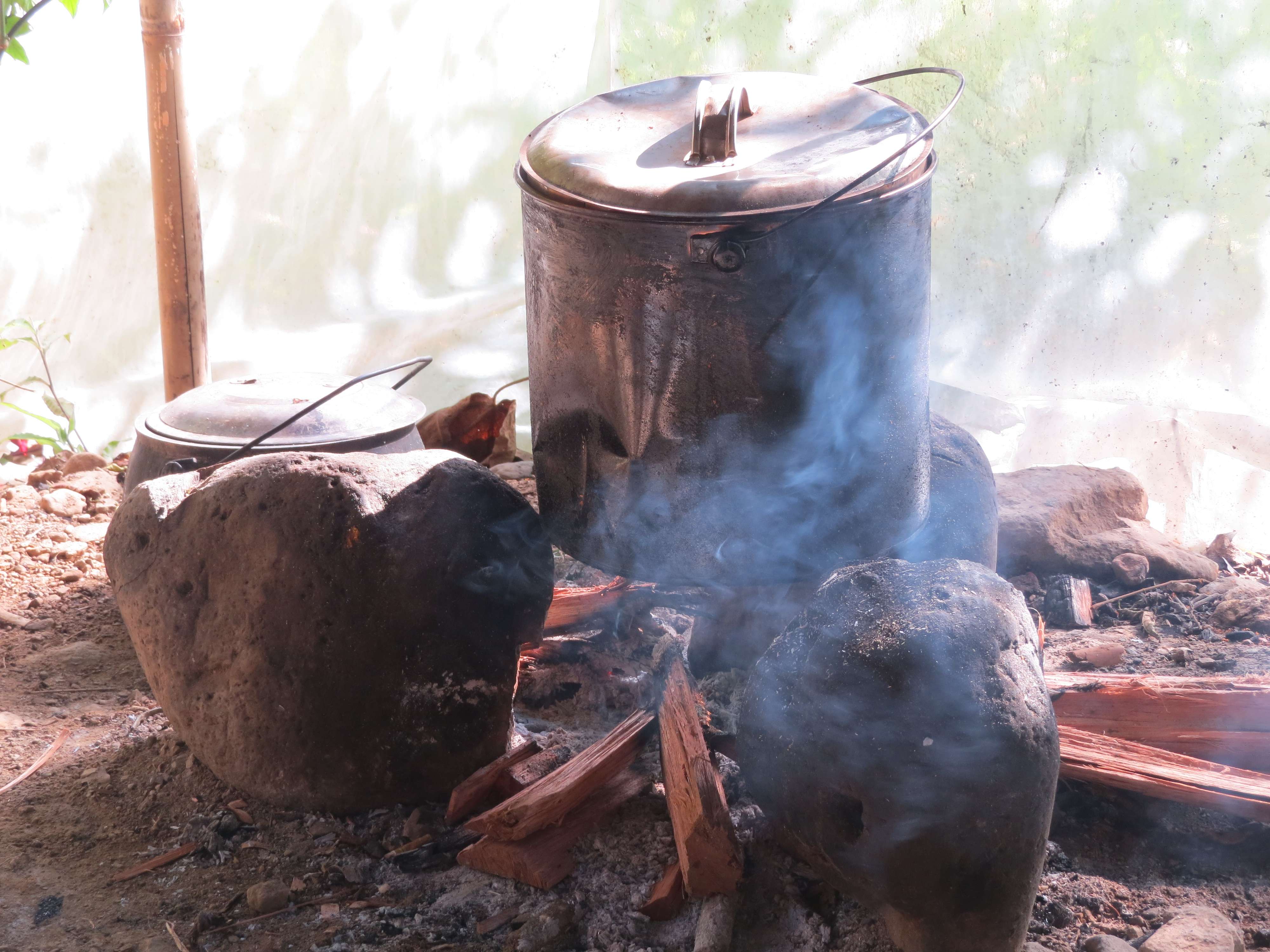 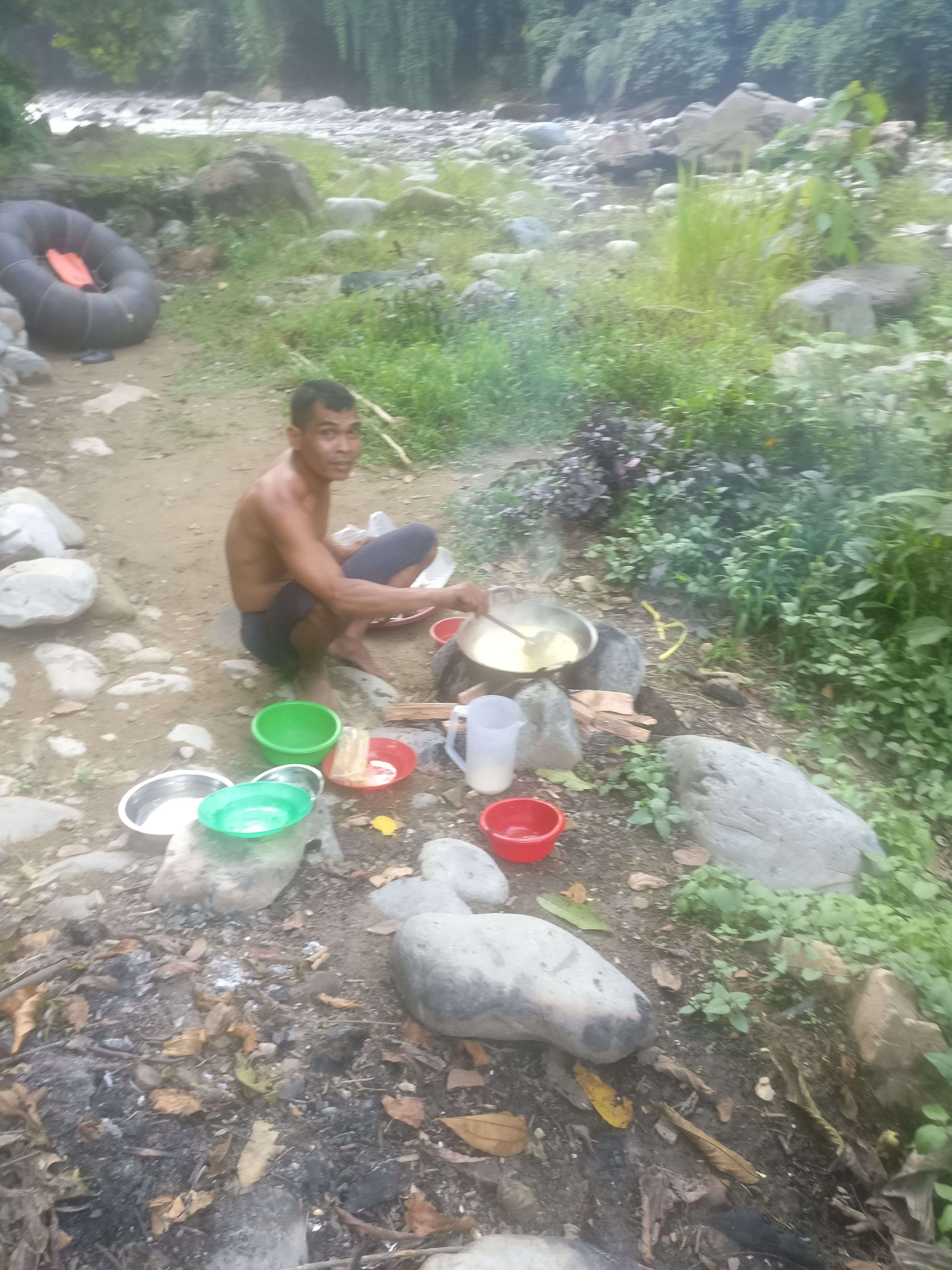 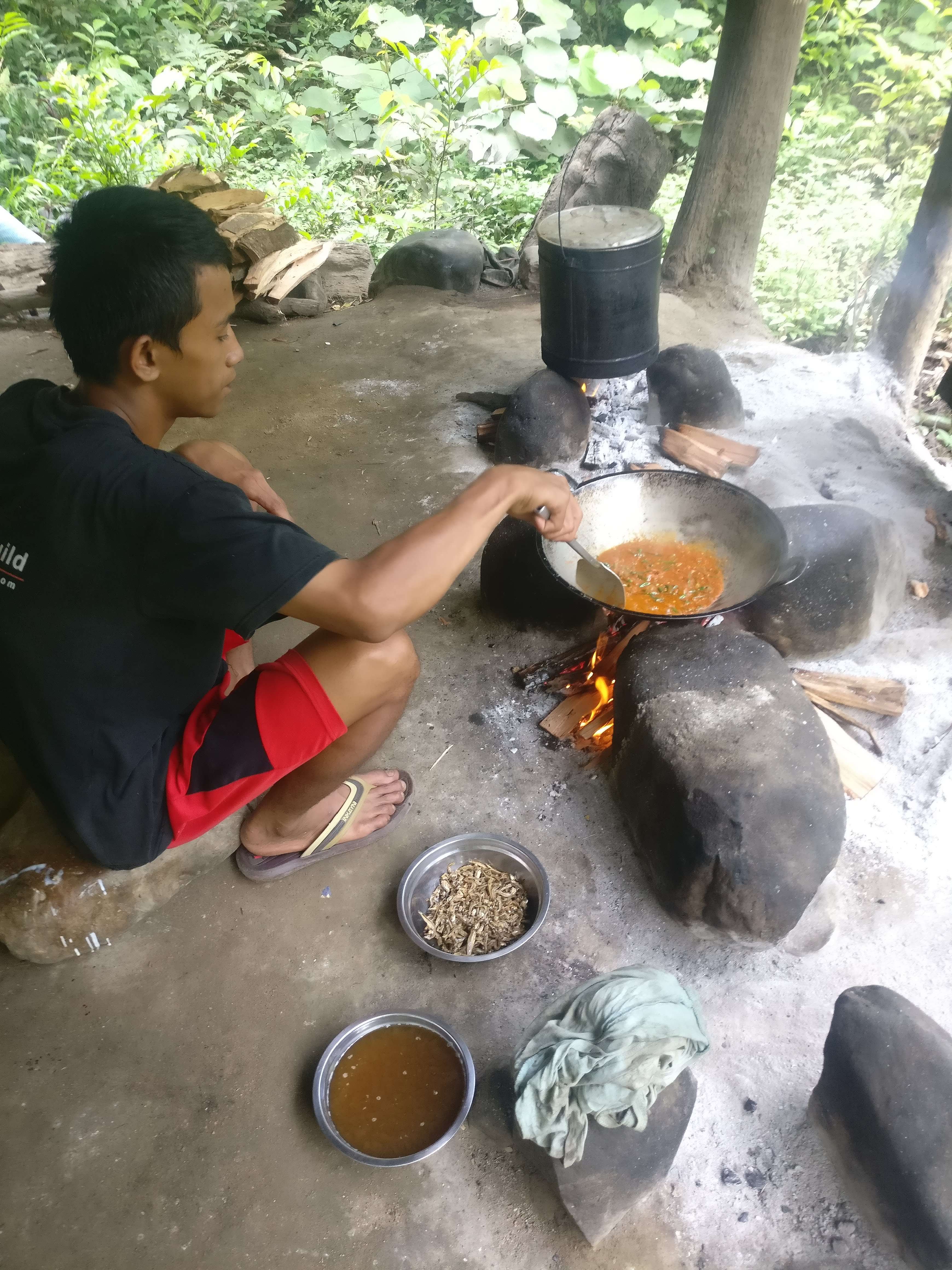 Right at dusk, it started to rain.   We went to our tent and got ready for sleeping.  It was then that I noticed Indra had nothing to keep him warm or to sleep in at night.      I had my sleeping pad, sleeping bag, plastic sheet, and long underwear.  I loaned him the long underwear and plastic sheet and he curled up in it and seemed perfectly happy.
One of the guides did show up to give us 2 foam mattresses to go along with the one I always carry, and the tent didn’t leak too bad.

In the morning, the skies had cleared, it was a beautiful day and we had a good breakfast of local Sumatra coffee, banana pancakes and omelettes.      The Danish couple prepared for their raft trip back to town. 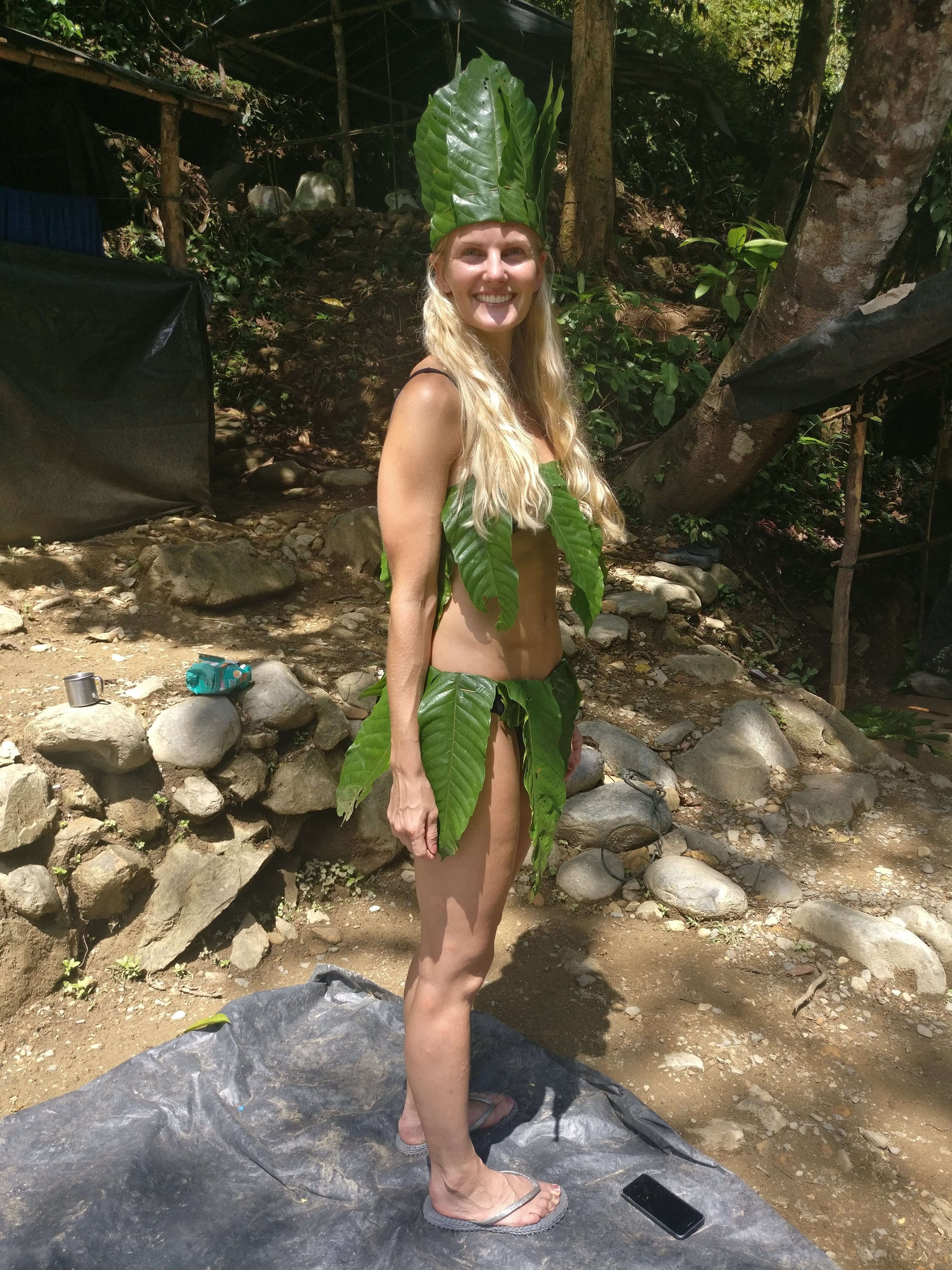 But we decided to go on another trek on the other side of the river where the guides said the animals were much more wild   So I opted to do some more trekking and we set off.   This time, Indra only wore his underwear and no shoes, no shirt.   So, I thought it was going to be easy.   Wrong!      Very steep trail after our ford once again of the big river.   This time I wore my hiking shoes.

We ascended a very steep trail, I couldn’t believe Indra was barefoot.  But everytime I looked, he was smiling and laughing.  One happy guide, that’s for sure.    Once we heard what may have been a tiger.   I don’t know if the guide was joking or not, but the smile vanished from Indra for once.      Then they pointed out an amazing bug on a tree. 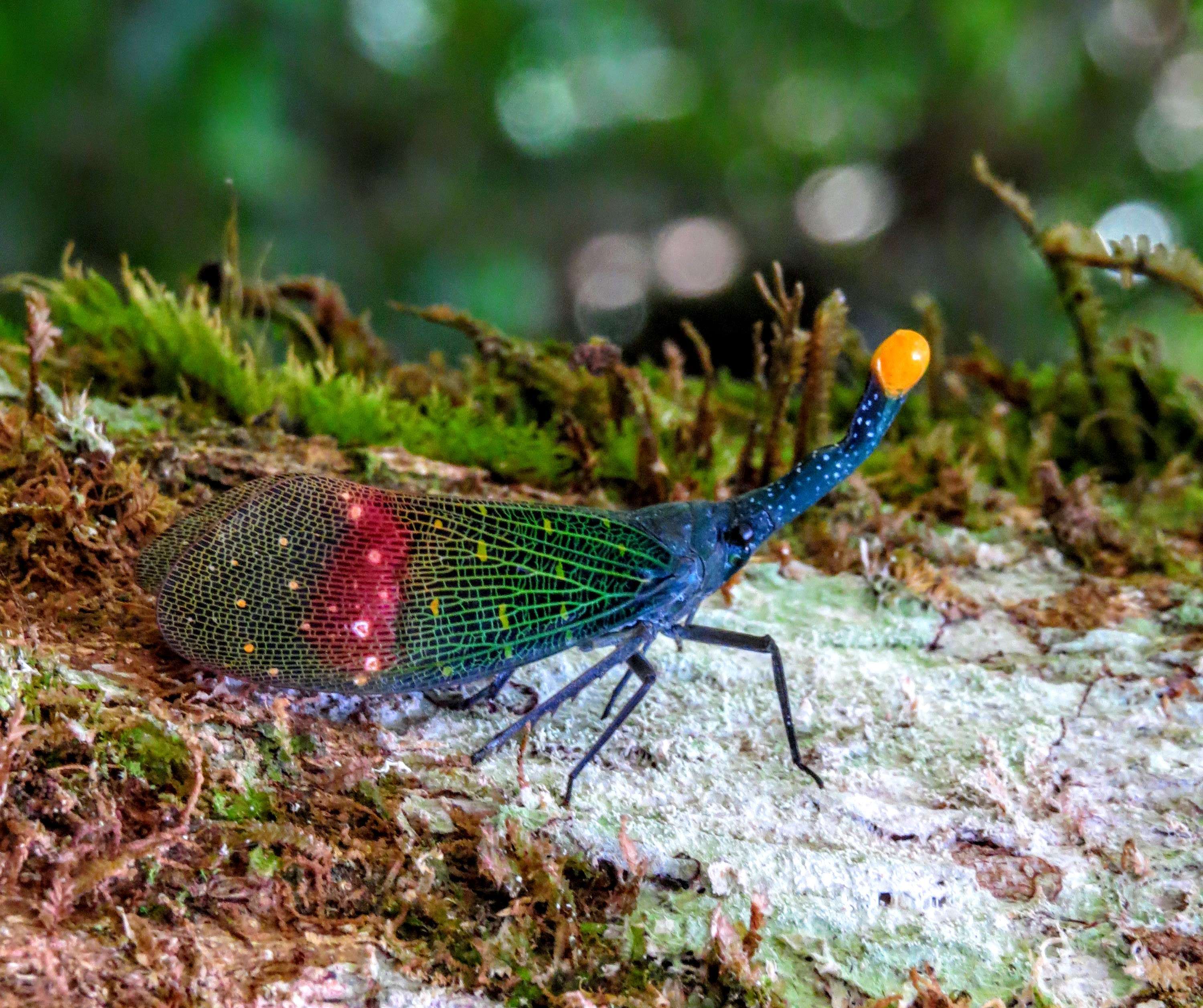 I found out later it is called an orange tipped lantern fly and is found in a few different countries in SE Asia including Thailand although I’ve never seen one before.

Fascinating colors.    it was a stenous hike and my shoulders are still sore from the descent where we had to go down backwards and grab roots to hold on.

Finally back at camp, they were getting the raft rig ready for our one hour long float (with rapids) back to town. 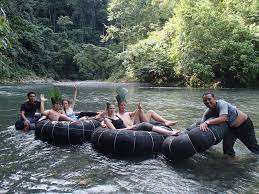 It started to rain a bit on the way down but the guides were very good at steering this rig through rapids with their long poles, although the guy in the front broke his.   Indra gladly gave up his as he was on a single tube behind us.
All is all, the trek was great.   I really can’t complain and I got to experience what I came for: Some adventure and hopefully a picture of an orangutan  (which I got more than I had ever hoped for)
I wish I could remember the name of the hotel and restaurant that I stayed at in town, on the river because their food was so good and they were all so friendly.        Next:  I continued the trip to Lake Toba by motorbike and that is another story, so………….stay tuned!    Story and travels continued here.