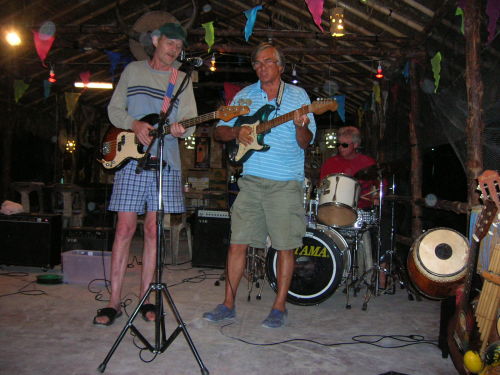 Filming “The Wave” A Czech film in Thailand

After our work as extras in the Tsunami, HBO movie last year here on Phuket, I got another similar phone call from my friend Anand this year back in March of 2007.

He told me they needed a “hippy” looking band for a Czech movie being filmed over near Krabi. (about 4 hours away by car from Phuket)

Since we live around a plethora of musicians, we started thinking of the ones with long hair.We came up with a bunch of guitar players but no drummers.So we asked Peter, a clean-cut looking Californian and he joined us along with Iggi, our bass player in the Harmony Catz and Groove Doctors.Along with Anand, that would make 4 of us.

Now Anand, Peter and I all have young kids.Mine being the youngest and only 1 ½ years at the time of this movie shoot.So, when he found out that they were looking for a few 4-6 year old kids,we told them we had kids and they said ok.

The pay was good as we were going to be more than just “extras” this time. They gave us a CD so we could learn the songs exactly as they were going to be played in the movie. 2 of the songs, we already knew but had to brush up on: “ Satisfaction” by the Stones, and “Sunshine of your Love” by Cream. The 3rd song was to be an original blues song written for the movie and it turned out to be an excellent blues song.

About a week before the shooting, we met some of the crew including an assistant director named David when they came to our band’s gig at “Joe Kool’s”nightclub in Karon.They were excited about our band and the shooting to follow.

So, the day finally arrived and we all boarded a mini-bus here in Phuket and headed over to the Krabi area for the shooting.After checking into our hotel, the vanload of us, including our wives and children for 3 of us, arrived at the location.

It was pretty rustic. Just a bunch of tin huts not unlike the ones that the Burmese construction workers often live in around the compound which included a recently made bar that was just a large bamboo hut on stilts with a drum set on and some musical amps and guitars. A big clearing was out front and a view down to the sea.

Since the filming was all supposed to take place at night, we had a few hours to eat, check out our equipment and meet the head director, producer and some of the stars.

Filming started about 8 or 9 PM which was really Simon’s (my 1 ½ year old son) bedtime. He tried hard but was losing interest fast. The kids were supposed to just run around on the stage as we played and bang away on some other drums and stuff laying around. That was ok until Simon fell off the 3 foot high stage two times. Thum (my wife) was there to catch him but was looking very worried as he had no fear and was getting sleepy. So, we let him go sleep and continued.

We were allowed to drink all the beer we wanted all this time as they wanted this film to be realistic and a good party.They also brought in about 30-40 long haired people from the area who were the partying crowd that were supposed to get excited and scream and yell to our music.

The music was piped in on the stage and we just faked what we were playing with lots of takes. It was good fun and sometimes they would take close-ups of our fingers on the guitars and keyboards.

After a while, the scene changed to between songs when they asked me to run off stage and hand my guitar to one of the stars and say:“C’mon Bob, play just one song”They shot from 4 different angles and the crowd was screaming “yes” in the background.

Most of the speaking was in Czech but of course we didn’t know any so I was allowed to say it in English.

We filmed until about 3 in the morning when they let us go to sleep after paying us and even included Simon’s pay although I doubt he’ll make the movie.

We woke up the next morning with some wicked hangovers and after then headed back to Phuket to our regular life there playing music and raising our families in the land of smiles.