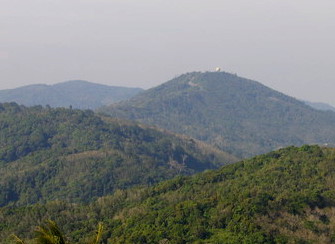 Being a Geography buff, and living in Phuket, I see as much of this beautiful island as I can.

Did a little research and saw that Mai Thao Sip Song Mountain was the highest point on the island.  It is the one just east of Patong and west of Wat Chalong with the big golf ball-looking structure on top.    It is actually a radar station for the military and restricted area.

I have been doing a lot of wilderness trekking and trailblazing trying to put together a hiking trail that will eventually go the length of the island, from Lam Prom Thep to the Sarasin bridge.    I want it to go over the high peaks as much as possible and follow the ridges and string together a trail that will be full of views, wilderness, and ridge walking.

I’ve been writing blog entries as I go along and eventually will have one in guidebook format for anyone wishing to hike it as well as the track uploaded to Google  maps for you to download to your own GPS and follow it precisely.         Here is the first and second sections for those interested.

Now obviously Mae Thao Sip Song Mountain should be on the trail.   But, unfortunately that’s impossible as it’s restricted and has very steep sides so traversing is extremely difficult.    I have plotted a route around it after 7 days of trying.

Now, I am well north of that area and up closer to Kathu waterfall.

Earlier in the week, when I was planning my route using Google Earth, as I do, I discovered that according to Google Earth, there is a higher peak.     But of course, this is only computer generated from satellite images so there could be room for error.

So, today I dropped my son off at school and went to the beach to set my new altimeter on my Garmin 60 CSX GPS, at 2 metres (it was low tide this morning).    Then I drove up to the Kathu hill that takes you to Patong.  The high point on that road has a small Taoist temple where many many people blow their horns as they go by.   Must be nerve-wracking for the caretakers who live there but maybe it’s something they are used to by now.    I stand around there for 10 minutes setting my GPS and clearing memory to build a new track and profile map and the horns had me ready to move out.  Fast!

It is a beautiful trail heading north out of there and I even pictured myself back home in eastern USA on the Appalachian trail with the well kept trail.   The only difference was the species of trees.   And of course the heat!

There is a saddle about halfway up with some homes or farms around there.   I don’t know which side they come up on but it must be a good road as the houses are nice although there is no electricity.

Found a beautiful spring full of lily pads and flowers in bloom.   Dipped my water bottle into it and was surprised the water looked so clear.    I tasted it and must say it is some of the best water I’ve had since I started coming here 9 years ago.

Continuing up, it turned into a bush-whack as the trails all ended or lead off in directions that weren’t going to work for my goal.    One section had a lot of bamboo and rubber trees that had been cut down and left to rot.  This is the kind of bush-whacking that is extremely difficult and it was on one of the steepest parts.
When things get tough like that, I often just traverse around the mountain and often find another trail somewhere.   Sure enough after about 40 minutes of very tough going through rotten brush, I found a great trail that looked like motocross bikes had kept it clear.
I followed that for a while and came to a house where 3 rubber tree men were eating.    Tried talking to them a bit although my Thai was almost as bad as their English so, I just went back to bushwhacking.   They probably thought I was a little crazy.  Many do when I go out on these excursions.

Got into some heavy vines that were next to impossible to get through without a machete so again,  I traversed until I found an old rubber tree farm and could go up along the border.    Not much further and I came to what was the high point.     Nothing there, except a property marker.   A cement post driven in that looked as though it had been there a very long time with lots of brush, weeds, bushes and vines growing up around it.

I put my GPS onto the altimeter page and took a picture.

545 meters. I checked it in feet: 1778 feet.   I was pretty excited as I knew that Mai Thao Sip Song mountain was around 500 metres.
I sat there a while enjoying the quiet.   There are good views of the Andaman sea about 50 metres east of the high point.

I then used the TracBack feature and followed my route back although I tried to make it  a little easier and followed the rubber tree border a little longer, but eventually had to bush-whack again.
I fell down pretty hard on the spot where the cut bamboo was as it was very steep here.

Stopped for another bottle of great tasting water on the way down and waved to a few of the farmers.

I was very tired when I got back to my motorcycle at the loud road crossing as it had taken me about 4 hours total of steep ascents and descents.

But there was one more thing I had to do.   With the altimeter set that morning, and having been to the new high point within 2 hours, I drove up to Mai Thao Sip Song Mountain to check the elevation.
I could tell when i was getting close (you can drive up although there are restricted area signs and guards at the top).  I probably looked like I had been out jogging and  I parked my bike and walked up the last 200-300 meters.  Now it was the hottest part of the day and it gets steep near the top.  So, probably looking very beat, i walked right up to the gate and waved at the soldiers inside.    The high point is about 10 meters away from the gate just to the right (east).     My altimeter read 482 meters!

Now, Google Earth has it at  512 meters to the west of the gate but, like I said, I don’t trust Google Earth as much as I trust my new barometric pressure altimeter.    But either way, Mai Thao Sip Song is the second highest point in Phuket and the newly discovered highest point has NO NAME!   And no access.    And no one knows.

So, I’m writing it all down here, just hours later as it is all fresh in my memory.    I will add  the screen shot of the GPS altitude page for the days hike.

Went out again today and first went and set the altimeter to sea level as we had rain yesterday and today looked like rain too so I figured the barometer had changed.   Sure enough, it was off by about 20 meters.   I then drove to Kathu waterfall where I parked the bike and headed up steeply to the gap from the east side towards the high point.
There was decent track going up as someone (I later found out who) has made cement tread going up the very steep climb.   At the top, I turned left or south to connect the point to where I last left off.

About 300 meters before the high point, I saw a man at a nice cabin who seemed friendly and said hi.  I told him what I was doing and he told me to stay to the right on the way up as it is easier track.     Sure enough, I’m glad he told me or I would’ve been bushwhacking again but got to follow track and rubber tree farms almost right to the top.

There are good views of Patong and Kamala beach from just before the high point.   When I  got to the spot that is the highest and checked the altimeter,  amazingly  it was exactly the same at 545 meters.    So, I am fairly positive that this is within a few meters of the correct altitude.       I sat down after a tough, steep climb, not having stopped since I parked back at 79 meters elevation.     470 meter climbs will tell you to stop and rest for sure.

On the way back down, I saw about a 2 meter long dark grey snake.   He squirmed away from me as fast as he could and I think we scared each other.     Back at the cabin, the man talked again and offered me water and bananas and then invited me up to his porch.   I went up and he explained that he was from the area and bought 50 rai (20 acres) about 15 years ago and planted fruit trees.   Mostly Dorian and jack fruit, but also some lemon and others.      He offered me coffee and I accepted as he was a pretty cool man with lots to add to the history of Phuket and the way it used to be.   He told me that at night, he sees and hears  people with guns shooting pigs, monkeys, chickens, and whatever they can shoot to eat.     They are mostly Burmese rubber tree farmers and construction workers.   I have seen them living off of frogs and lizards and slugs and geckos and the women collecting wild edible plants.      These people have it rough as yesterday I saw a truckload of them going down the highway in a pouring down rainstorm packed in like sardines with no cover except their bandannas.   Very sad.

So, talked with the man for about an hour I guess and then headed out and continued past the point where I came up to check out a road that was on my GPS.   Saw another cabin with no one home but another nice spot.    The road turned out to be slightly overgrown but possibly and easier way in from the Kamala side that I will try next time I come up.     Saw one side trail that I checked out and it was a pipe to a concrete water basin and most likely good water as there is not much higher  elevation around here.          I then went back down the steep trail in fast time and headed home.   Now, the further north I get on this project, the longer the drive from and to home to get to the trail where I left off.

If you want to keep following my adventures on this trail, you can see my next blog entry here.   It is the next section northbound and one of the hardest and most remote up to the Heroine’s monument.

Also, my first blog entry which explains a bit more on why I would like to see this trail exist and my first steps and ideas are on a post from August 2008 here.

Down-loadable track that can be installed in your own GPS and followed can be found at Google Maps HERE.

Brought to you by Warmstuff Distributing   www.warmstuff.com (selling thermal long johns and warm stuff to keep people warm all over the world)