Having done a lot of world wide travel in my life (especially from 1989 to 2004), I am sometimes asked about my best experience.

Of course, there have been so many great experiences and some of them I have written about.     I don’t like that word “Best”, as it implies other times are not as good.

But, here’s a story of one that I will consider one of the best times of my life.

In 1992, in my attempt to travel the world without flying, I found myself hitchhiking from Broome Australia to Darwin.

Broome is in western Australia, miles from anywhere and has some of the highest tides in the world.  Very interesting place.
Not many Ozzies have even been to Broome but, we were blown there by a cyclone while sailing from Timor in Indonesia to Darwin.
So, our skipper was heading eventually to Perth and we wanted to go to Darwin and then Alice Springs in route to Sydney eventually.  (we had a general plan of attack but, basically went with the flow)

So an English girl and I and 2 other guys decided to hitchhike the approx 1500 kms from Broome to Darwin.
Of course, that’s too many to hitch so we split up.
The girl (sorry, I forget her name now) and I teamed up and the two guys decided to stay near town and only accept a ride that was going all the way to Darwin as they were not keen on getting stuck in the outback in the middle of nowhere and have to spend the night.
The girl and I, let’s call her Sheila (Ozzie slang for “girl”) decided we were a little more adventurous and would accept any ride offered.

The 2 guys were nice enough to hide until we got our 1st ride and we didn’t see them again until Darwin where we all agreed to meet at a certain guest house.

Now, there is only one road that goes through western Australia in the north and although you would think it a major highway after seeing it on a map, in reality it is only a 2 lane road.
And the outback doesn’t have many trees and is a hot and lonely place.

We got some interesting rides.
I remember one of them was a government employee who’s job was to go visit the aboriginals and help them in different ways:
Trying to make sure they were aware how bad alcohol was for them.    Trying to see what they needed and help them get it.
We asked what were some of the things that they wanted and he told an interesting story about the leaders of a tribe had collected and saved a good bit of money (the Oz govt. gives them each a monthly stipend), and they asked how much it would cost to buy one of the machines that print money!

We found there were on average a car or truck driving on this road approximately every 20 minutes.   There was no shade, usually and sometimes we had to hide next to these tall towers of dirt that turned out to be termite mounds or villages,  just to try to get some shade from the hot sun. 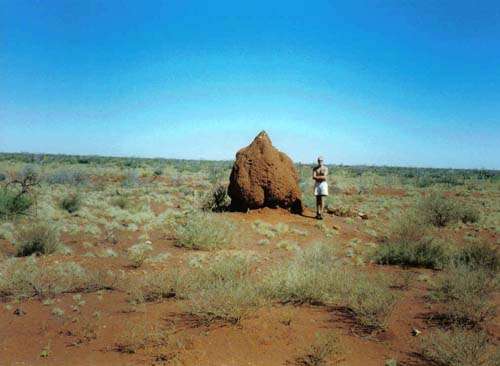 Maybe every 3rd or 4th car or pickup would pick us up, but we discovered that almost no one drives at night and we found out why one evening when we got to town just after sunset.      A kangaroo was seen on the road about 500-700 meters in front of us (1/3 of a mile?) and our driver slowed down immedietly.  We wondered why at first but then saw the “roo” was having trouble and panicking from the crossing of the road with lights coming at it.    It was slipping and sliding and humorously falling and getting up in it’s panic.    We eventually had to almost stop and let him find his way.   Funny but serious enough that many people had “roo guards” on their front bumpers.

Anyway, each night we would stop in a town for the night and get a room and discover a bit about outback village nightlife.

One night, we happened to go near the center of town with my guitar in hand (I usually carry one when travling) and saw a group of perhaps 8 0r 9 aboriginal people sitting in a circle.
They were drinking a bit and the women were standing near the nearby bank.

They said something (hard to understand what exactly) and pointed to my guitar.
I saw they had some didgeridoos so I walked over and they  motioned for me to sit down with them.
I heard a song or two and tuned my guitar to the main note that came from their instruments and started playing some mellow, Pink Floyd type music behind them.
Well, they were impressed with Pink Floyd, and I was totally impressed with their music and rhythm of their music style.

In all my years of playing music, this was perhaps the best sounding thing I’d even done.
After a few songs, they started passing the wine bottle to me and Sheila and we were tourists no longer (to them)

I started noticing that their women were pan-handling from people going to the ATM machine nearby.
Whenever they scored some cash, they would wait for the people to leave and then come over and high five everyone (including us).

Then they would hit the liquor store and buy another bottle of wine.
We ended up jamming probably a few hours, I don’t remember but the music was just awesome and the walls that are built up through different cultures and classes was easily shed.

I only wish someone had a recording of this great night because I know it is a once in a lifetime experience.

For a footnote to this story, we got to Darwin 5 days after leaving Broome and went to the aforementioned guesthouse to see if our 2 friends were there.
They were.
We asked them how their trip went and they said they waited in that spot for 4 days and finally got a ride going all the way to Darwin.
When asked how long they had been there before us, they said “5 minutes” !