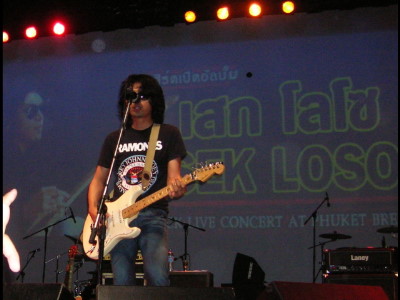 My favorite rock & roll band in Thailand played last night at the newly opened Phuket Brewery across from Tesco Lotus.

2 of my good friends and fellow rock and roll lovers, Kim and Cathy went along with me. I had checked the website for the newest venue for hosting big groups, the Phuket Brewery but it being new, didn’t say much. Just basically had a poster on there saying Loso, May 1st.
So, we hopped in my truck and headed over.

We got there about 8 PM and followed a few cars heading in and followed the car park signs.   While waiting for a mini-bus to move, the best parking spot in the whole place, right in front of the entrance, opened up so we pulled right in, pretty impressed with out luck at finding it.     Walked up the steps and saw a ticket window with only one or two other people in line.    I went over and the girls followed and we got in the short line and when it was my turn to be first, 2 Thai people immedietly crowded in from both sides and started arranging for their tickets right through me as if i didn’t exist.

The girls had just come from a Thai culture course as they were school teachers and it was required.   Apparantly one of the things they learned was to have patience, especially in lines so they told me to chill out and just wait, this was the Thai way.   So, i waited about 5 minutes and then it was my turn.   I said “three tickets for LOSO please” and she said.  “Sorry, finished” !  Since Kim speaks good Thai, she asked if it could be possibly sold out and the lady said yes but we could wait for cancellations.    We may have looked a little bummed out because a farang man (caucasion) and his Thia girl friend asked us if we had a problem.    We explained the situation and they said they had room at their table.
The girl went back up to the head of the line and her and Kim came back with 3 more tickets to join them.   Great!

Looking around the place, there is what seems to be a semi-outdoor restaurant area off to the left but the big room, for the shows, is straight ahead in the back.   It is Huge!

Best seats in the crowded house!

So, we went inside the huge arena and were escorted up to the front all the way over on the side.   There seemed to be some confusion about our tickets and their boss came over to help and showed the girl her error and proceeded to take us right up to the very middle and the very first table right next to the stage!    Could this be our seats?  With aprox 300 tables in the whole place, we had the best one?

Sure enough, a waitress came over and we ordered a round of dark beers in pitchers and checked out the new hall.  It is really big with about a 100 foot stage complete with lights all over the ceiling and a big sound system.    Soon after, our beers showed up and the place started filling up.   4 more of the Thai girlfriend’s friends showed up and they were some beautiful Thai 20-30 year olds and we introduced ourselves all around and ordered some food to go along with the drinks.      Here i was with one other guy and 6 or 7 girls in the best seat in the house (big house) with the best parking spot outside.   What great luck!

The beers came.  It’s rare to get a good, heavier, dark beer in Thailand.  Not that Thai beers are not good but they aren’t very heavy and if you like darker, heavier beers, check out the Brewery.    The place was filling up fast and soon enough, a magic show started on stage right in front of us.
There were girls who twisted like a pretzel, magic, a guy spinning plates (about a dozen at a time) and a guy shooting mouth darts at a volunteer from the audience holding 4 balloons.     Then the house band played some numbers with a woman soloist and two guys soloing a few songs and then it turned into one of these comedy acts that are so famous in Thailand although not really my cup of tea, where two guys start joking and one of them is older and dressed like a woman.    Thai people laugh so hard at these things.   Of course, i had no idea what they were saying but then, they pointed at Steve (the Farang who got s the seats and is in the brown shirt above (picture) and started coming on to him (the transvestite anyway)      I was so glad it wasn’t me.    Someone told him to offer the guy a sausage from our food plate and he did and the guy started making some obscene gestures and eventually ate the sausage after playing with it for a while.

Finally, the moment we were waiting for arrived and the curtain opened once again to find Sek Loso and his 4 piece band opening up the set to some of his great hits.
Immedietly, people started filing past us to get in the small space between us and the stage so we knew it was time to stand up and start dancing along and partying to some great rock and roll.

Going to a live rock show in Thailand with one of the the more famous superstars can be quite a treat.    Thai people love their music and party hard.   Almost everyone sing along to almost every song and they all knew all the words.    Having been a LOSO fan for a long time, i knew the tunes but of course, didn’t know the words.     Once again, i couldn’t believe that i was standing and dancing about 10 feet away from Sek Loso and watching his every move and emotion and hearing his guitar come through so loud.

The more he played, the more the people came up to dance and party as close to him as they could.  Which basically meant, at our table.   This was great fun as i like being close to the action and am not one to hide in the back at concerts.       After they played about 8 or 9 songs, Sed proceeded to take off his shirt and sunglasses (his trademark) and then some other musicians came out of the wings to join along.    He switched over to some western standards and played Jimi Hendrix’s Purple Haze as well as Cocaine by Eric Clapton and these two other guitar players took over on some fast solos while Sed sat down on the drum riser and had a drink.

He came back to join them with some showing off and playing with his teeth and running around.   I must say i think he had a few to drink which was probably one of the things the crowd around me loved about him.

LOSO stands for Lo-Society and he is from the poor northeast corner of Thailand known as Issan. I think he is actually from Korat.   I’ve heard he writes a song a day and has many many hits in this country.   He had toured in England and Europe and possibly the US also (not sure) and he had a Farang band for those tours.   Tonight, he had a Farang drummer but the bass player and rhythy guitar player, as well as the two solo guys that joined in, were Thai.

After those 2 or 3 western covers, they brought out his acoustic guitar and he went into some more big hits and the crowd (who had been a little quiet for the western songs) rose up in unison singing along to every word once again.

After about 1 1/2 hours, I headed for some air and realized i might not be able to come up that close very easily once leaving.

In the back, i ran into some friends who were there and was talking a bit (something that was impossible to do at our seats)   The sound was great all over the big hall.   I would estimate that there were 2-3,000 people there filling up the place.    I did take one picture from back there although it didn’t come out too good.

I went outside for some air and Kim and Cathy kept running out to tell me the great views they are having from moving all around, including up in the balcony where they sat for a bit with the performers in the beginning of the show (magician and pretzel girl, etc) and they found free beer up there.

About 2 AM we left as they had to go to work the next day.   The band was still playing.  I was still recognizing the hits and they were going on their 3rd hour of non-stop music.    I dont’ know how long they played but I know it was longer than most any concert i remember.   We definitely got our money’s worth as the tickets for the show had only cost 299 baht each!    (about $9.00)

Thanks Mr Sek Loso.   And keep playing the Great Music!