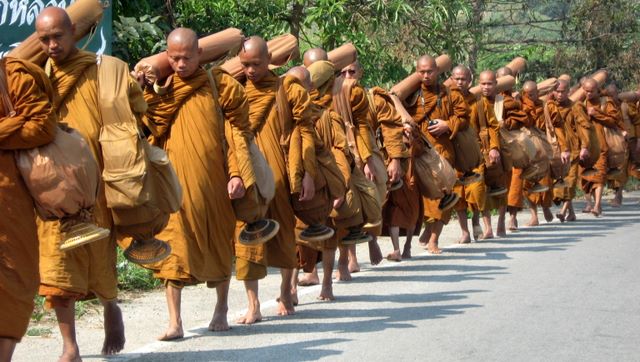 Continuing along heading north, we are on our way to SukuThai which was the beginning of Thai politics and the center of Siam back in the 14th century.     We stopped at a waterfall park which was in a nice setting in a grove of teak forest and cooked up some fish that we bought on our small grill.

Continueing on to the town of Sukothai, we got a room finally in the Riverside Hotel after going back and forth and looking for the best internet connection to watch the game.    It was about the best room in town I guess although still very basic except it had air-con and hot water.   All for 350 baht ($10).

It has really been a coldspell in the north and even TV was talking about it and everyone looking cold.  We had dinner on the street not far from the hotel and retired early as I got up at midnight to watch the Eagles game.    But the 20 baht for 2 hour voucher I bought for the internet only lasted 20 minutes each.  I had bought 4 and was down to one by halftime.   So, I then went to a nearby cyber café that I was lucky to find open although it was full of young Thai boys playing their games and shouting.   Luckily they had headphones and I was into the game.   The Eagles won and it was over around 4:15 AM.

In the morning, we headed over to Old Sukothai which was very beautiful and very historic for Thailand from the 15th century.    We spent a few hours there playing tourist and taking lots of pictures before heading out to Mae Sot which was over some big mountains where the people’s look and dress and speech changed.    We are getting into the hill people and they seem shorter, squatter, and wear different clothes.   Of course it is cold so maybe that’s why I am noticing such a big change.

Arriving in Mae Sot, we found one of the best hotels (again) in this town called PornThep Hotel and it was 200 baht   (about $6.00)    The rooms all seem about the same with nothing fancy at all.   Not much variety as we have not seen any really nice places since we left Bangkok.   That’s Ok as this trip is all about seeing Thailand and this is Thailand.

Mae Sot was a bustling town, more like a real city.   We took a ride on a rig with an old guy bicycling us through traffic that I thought would kill the old guy.     Then a nice dinner of fish and local food at a nearby restaurant.   Everyone is selling warm clothes as it’s cold.  We saw on the news today that they had ice in Chiang Mai (our destination) so now, Thum is getting scared and we are going to go shopping for a coat for her.

Took a ride to the border (about 7kms away from here) and shopped a bit.  Got Thum a coat, Simon got an elephant that walks and roars and we ate at a nice restaurant there.    Looking across the bridge into Burma looks pretty poor and most people walking this way don’t have shoes.

We then headed north along the border and river and the road got pretty windy.  One of the highlights of the day (or

low-lights) was seeing a huge refuge camp that must’ve extended for 3 miles along the road and a half-mile deep.   It was thatch huts with leafy roof shingles packed in like sardines, some even 3 stories high.   It was thriving with people and they looked poor.    There were double police or army checkpoints on both ends of this so, I guess they don’t let these people go anywhere.   I can’t imagine if a fire would start out in there.   It is all hastily constructed.

Now, all pictures from this trip have been uploaded and can be seen online Here.