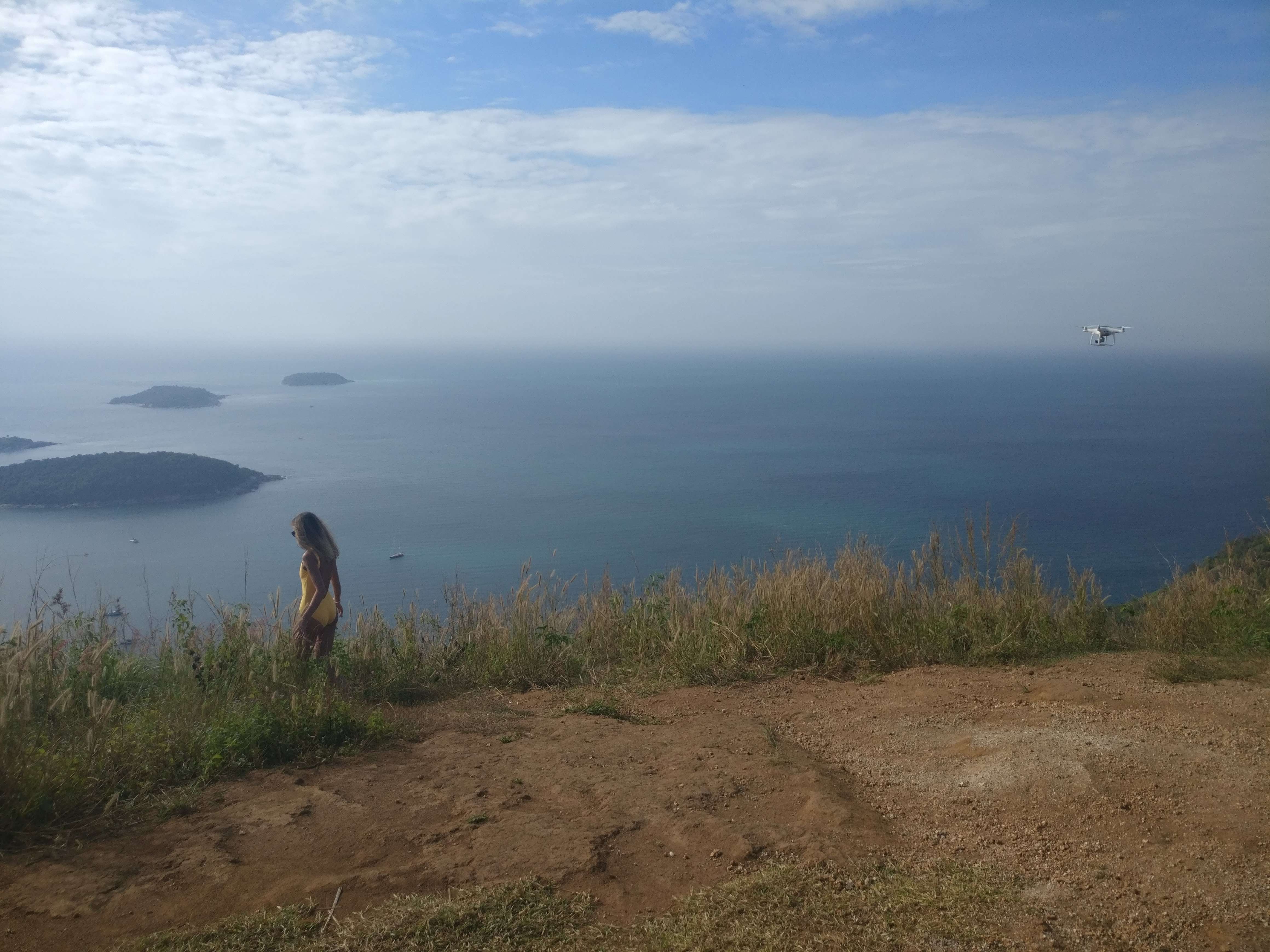 Back to blogging about some good hill walks in southern Phuket.

Haven’t written for quite some time. (I see it’s been over 2 years! Ouch!)

That doesn’t mean I haven’t been walking.
I did go on a 1263km hike this past summer with my friend Ray “Wall” Greenlaw in the Balkan peninsula:  Slovenia, Croatia, Bosnia/Herzegovina, Montenegro and Albania
I will write that up soon.
But this post will be about my most recent walks in southern Phuket.

I have been using Facebook to show pictures of my morning walks a lot.
Here is the link to that page: https://www.facebook.com/glenn.fleagle

If you can’t get on, here are a few of those pics:

There are all just in the past week.

So, I have been trying to mix up my walks and trying to get away from my most used ones, which consists of:
1/ Starting near the sea gypsy village in eastern Rawai, and walking the peninsula over to the old Evason resort, then back, along Rawai beach, turn left before Ao-bor-tor and head up the road closest to the shoreline.  Up to Laem Prom Thep, down the other side to YaNui Beach, up to the windmill hill, down to Nai Harn lagoon, then either back by road to the beginning, or (if I feel energetic), out to Ao Sane and back to the beginning via the connector road from Cheers bar to the Or-bator @ Rawai.

2/ Starting at the new dam near Phunaka Golf course.  And heading up to the headwaters end (NW) up past the elephant camp to the gate, then go left and up the 2nd steepest road there.  Eventually that gets up to the power lines at the top and goes west all the way over to Patong, where you have the choice to go steeply down to town (if I feel energetic, I do this), or walk a bit on the upper most road (above Ha-Sip-Pee  road), till the roads and paths peter out and you can’t go anymore without a machete, then turn around and go back   This is a great walk with literally no people (ever) and eagles, wild fruit, great views, and quiet. (read no traffic whatsoever)

3/ Here’s an old favorite with being near the jungle, but not in it, as there are concrete and dirt roads all the way:   Start at the Taoist temple at the apex of the road between Kathu and Patong (where so many Thai people beep their horns 3 times and it is very loud)   (just to the east of the temple, there is a small road)
I park behind the temple and walk from there.  But it is a very steep start.
To make it easier, you can ride up the 1st km to the Buddhist temple turn off and continue on the road.
Someone has posted new signs saying: Patong this way, with an arrow, and it’s easy to follow them all the way to Ha-Sip-pee road.   This out and back route is exactly 10kms, with a few hills.

4/ The traditional “Phuket jungle hike” that starts at the Gibbon Rehabilitation center near Bang Pae waterfall, and goes 3 kms over the mountain to the TonSai waterfall near Talang.    This used to be a great walk, but I stopped doing it because: Too far from my home on the motorbike (or car), and it has turned into a maze of trails because of blowdowns and NO MAINTENANCE!      I really wish the park rangers in these 2 parks (either end) would go out, even it it’s only once a year, and clean up the trail with saws and machetes to make the trail easier to follow.   Even though I’ve been on this trail a dozen times or more, I still take my GPS when I go, because it’s full of false trails and so easy to get lost up there.
But, when cleared it is awesome with swimming holes here and there, refreshment stands at either end, some wildlife (beware of the monkeys that have been supposedly “rehabilitated”), and great jungle hiking with waterfalls at each end.

5/ Going to list one more although not advisable without a machete.     This one starts at the bar in the northeast corner of Nai Harn lake.   Take the dirt road (that separates the bar from the new Spa, the one that washes all the mud into the road whenever it rains), up steeply.  After about 200 meters, there are 2 Myanmar worker camps, complete with chickens, kids and pleasant people who always seem to have a smile.   Continue on, but don’t go down where there is a fork.  Look for the old yacht that someone took up there (way back when the road was obviously much better).     Continue up the old concrete driveway but bear left before you get to the abandoned building.   Just 100 meters after this, is where you’ll need a machete as it always grows shut (no one keeping it open, cept maybe me),   eventually, you can bear right and hit a good path that rubber tree farmers keep clear,  Just keep going up, trying to stay as close to the sea as possible. Some good views.  Eventually, (500 meters?) you see a barbed wire fence on the left.  On the other side of it is a small path that takes you up steeply to some dirt roads at the top that the 4-wheeler folks keep open.    There is a maze of roads up here and actually 4 good lookouts,  seeing in all 4 compass directions can be walked to within 2 kms of each other!     Here are some pictures of those 4, from a walk I did about 1 week ago. 6/  OK, I’m going to add a 6th one because I went out today and decided to hike down to Nui Beach  (near the maize of dirt roads around “Black Rock” and trip #5 above)

I hadn’t been down there in at least 10 years.  I only went once because the road was terrible, and rumor had it that the owner pulled a gun on someone, so, no need to mess with THAT!

But I heard that were new owners and they built a swimming pool and the restaurant was open.
So, I walked down there today.  It is a lot of dowhill as I started at the dirt pullout before Karon viewpoint coming from Nai Harn.   You could drive much closer, but I’m out for exercise so, I like to make my walks at least 10 kms, although this one turned out to be only about 5 (but all up or down hill)

Saw some cool shacks and picnic area on the way down, and then a nice house overlooking the complex that is now called  “Water Beach Club, Phuket”

And at last a sign noting the new name:

About 10 people around, having drinks, sunbathing or just relaxing by the beautiful beach.

Stuck around for about an hour and then checked out some construction projects going on, and asked around about bungalows.   A girl who worked there said: “Not yet.   Next year we hope to have some”  Seemed to me they’d be ready before that as there were about 3 or 4 projects going on.   I had a coconut water drink and it was ice cold.
On the steep walk back up, saw about 8 more people heading down.  So, I guess the word is out and this place is HAPPENING!     I would advise you check it out.
If you want to take your motorbike down, you can, but you’d better be good as the road isn’t the best.  There is a shuttle service sign of 100 baht per person (back of pickup I believe)    Good luck and have fun.

All said, this is a beautiful place but only about a 5km walk.   I prefer longer ones and may head up to the north or central part of the island of Phuke next week.