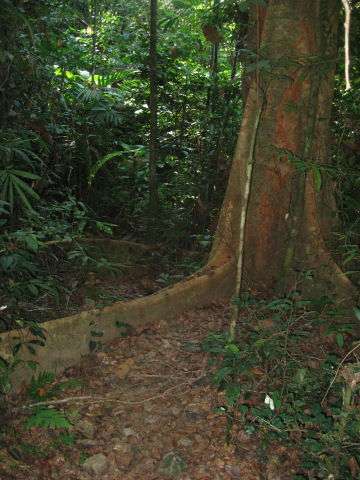 Attacked by a Gibbon monkey

As some may know from reading past posts on this blog, I have been trailblazing a hiking trail on the island of Phuket here for the past 2 1/2 years.   I have been putting a route over the high peaks of the many mountains here that when completed, will go from Prom Thep Cape (the most southernly point) to the Sarasin bridge (it’s northern terminus).

I have been out exploring for more than 50 days now over those years and started in the south and am now up north and east of the Heroine’s monument (which is the center of the island)
The mountains are much more wild up there than in the more touristy south.
Which means access is very difficult and trails, roads, rubber trees, and easily walked paths are hard to find.
So, I now take a machete with me and two days ago, I set out with my full backpack, including tent and sleeping gear, stove, fuel and a food for 2 days, one night.

I spent  the first 2 1/2 hours bushwhacking up this steep mountain to where i had left off before.

Good trail near the National Park

Not too far after that, I found a small trail that basically went in the general direction of my proposed route and followed it, lost it, followed another one, lost it, and made my way all day to this area where i had gone to see about access last week near a National Park.

Well, there’s also a monkey (gibbon) rehabilitation center nearby and they reintroduce gibbons back into the wild after they fix them up.

So, it’s about 4:00 PM and I am bushwhacking when this monkey attacks me from above. He first came down and took my hat. and made noises, then he jumped down again and grabbed my watch and broke it.   Then he jumped on my pack (which was on my back) and started pulling my hair and trying to grab my arm.   I was freakin out.    I had my machete in my hand and would have killed him if I could, but he was too fast.
He pulled my tent stakes out of my side pocket and my big water bottle out and threw it.  He was big, about 3 1/2 feet high?

There was a lot of bamboo nearby so whenever I could take my eyes off him, I would chop a big piece and then throw it at him.  He was too quick.  Even when I had a great throw, he would dodge it.  Finally after a good 10 minutes (felt like an hour) he slowly left.

So, I gathered up all my stuff and continued my journey, found another trail and got the hell out of there.

After about another 15-20 minutes, I found a beautiful swimming hold on a good trail. There was a sign there explaining the gibbon project and telling you that they can be aggressive.
(Unfortunately, they didn’t have signs before I had this encounter)
But, then i lost the trail again (or it went the wrong way) and i found myself bushwhacking again until the light of day started fading.

I thought about setting up my tent somewhere (already had water) but then i heard a monkey again.
There’s no way I was going to camp there.
So, i bailed.
Sorry to say, I was near the park that I knew about so, found the trail that I had GPS’d last week and hiked out and hitched a ride back to my motorbike. (real dark by now)
When I told Thum (my Thai wife)  she was mad that I go out there by myself and all that.
Simon, my 4 year old son was very interested and wanted to hear all about it.
I am quite cut up from all the bushwhacking too so he was impressed.

Anyway, in all of my 20+ years of backpacking or trekking, I have never been attacked by a wild animal before and let me tell you, it is scary.
That monkey could have bitten me or done a lot too me and maybe even killed me if he wanted to.
He was that fast.