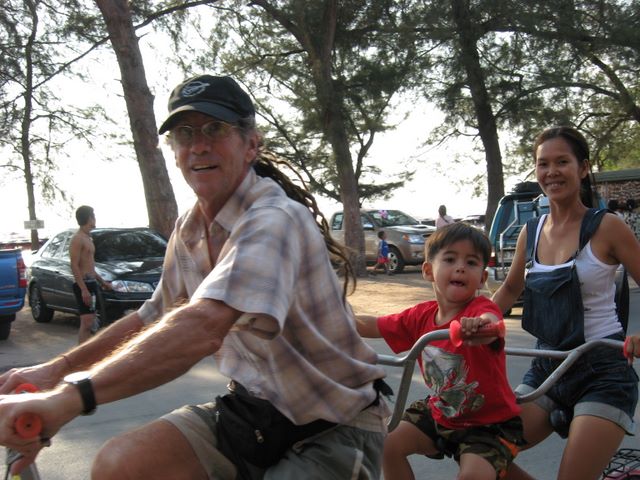 We left Phuket on Saturday, Jan 3rd around 7 AM.

That first day was pretty uneventful as we just drove as far north as we could, stopping in Cha-am after 12 hours of driving.   Traffic was tough as many people were heading home after the holidays.

But Cha-am was great as usual.   We have stayed here 3 times before and just love the laid back scene with young people riding bikes, and the pleasant beach scene

After a good meal in the restaurant next door (where we’ve eaten before and is very old, and very Thai) full of young people.   Most of the people who seem to visit this town are young thai people and couples.    They get up early and there is not much of a bar scene that we could see.

In the morning, we rented a bike for 3   and almost wrecked it a few times as it wasn’t in the best of shape but we had a lot of laughs trying to drive it and stopped on the way for a nice breakfast of Thai food.

Checking out, we headed north for the aprox 3 hour ride to Bangkok.   We put the hotel into the GPS with the new mapping software installed now and it worked great.    We just  followed directions on the device and it led me directly to our hotel.

We stayed at the Sawasdee Lang Suan which is just north (about 3 blocks) from Lumpini park which is the biggest park in Bangkok and we just loved it there.   Simon had lots of playgrounds to choose from and since we arrived on a Sunday, they were full of Thai and Farang kids and their parents.    Also, we could jog (well I could) around the whole park which is 2.3 km and I saw paddle boats which I knew would be a hit with Simon so, we headed over for a short ride as it was getting late.

In the morning we got ready for our day of red tape and tried to walk to the US embassy which was supposed to be close (and it was) but, I went the wrong way.  Once we figured it all out, we had to backtrack the ½ mile or so and found out the embassy was only about 3 blocks from our hotel.   We had to spend a lot of time there as they are not the friendliest people and everything has to be stood in line for and paid for and I had done it all before but it had expired so………….anyway, we got out of there after and hour or so and then had to walk down the street and get everything translated into Thai.  That took another hour and then I let Simon and Thum go back to the hotel and I went across town in a taxi to the legal dept. of Thailand to get the papers official.    They sent them to our house in Phuket where Meow said she got them the next day.   So much for the one day service for double the price (I didn’t pay for it and it took only a day anyway)

We had a great view from our hotel and really enjoyed the place.

Simon and I went for a ride on the SkyTrain, which he fell in love with.

We spent the rest of the day in the park again and also that night, Simon and I got a taxi to Sukemvit area where we got some food and people watched for a while and then I bought some Thai silk boxer shorts for selling in the business.    Everybody loved Simon but it was getting late.

The next morning (jan 6th) we checked out after another morning at the park and headed over to Noi’s house (Thum’s older sister) It took a long time to get there as I missed a few turns as I was in the wrong lane for the GPS’s directions.  Arriving at Noi’s was a treat.   She lives in a dump build on top of a swamp with rotten boards and the shit water is just underneath the place.   Thum and Simon had spent 2 days there waiting for me so the neighborhood all knew Simon and he felt right at home.

We walked around a bit and even saw a bunch of little kids swimming and laughing and having fun in the shit water.    It sure makes you appreciate what you have when you see this kind of poverty.

That night, we streetwalked for some Roti and banana shakes after Thum made a lot of food that we had on the barbecue.    We treated the family there as usual and spent a night of cold (compared to Phuket) and buggy night.    The girls got a little drunk and had hangovers.   Thum wasn’t much help in the morning as I was trying to drive out of Bangkok during rush hour traffic.

We made a few wrong turns and headed towards Bpu’s Wat (Buddhist monastery), near the town of Ban Pong.   It took all morning to drive the 80 kms but we finally got there and it was in a really nice spot along the river Kwai (I forget the Thai name)

Bpu is an old friend from Phuket who we’ve known for 4 years and has joined the monastery as a monk a year and a half ago.   We had a nice visit with him and then we went across the river to the shadow puppet museum where we saw kids learning the craft and the museum was pretty amazing.

Then we headed down to the floating market which we thought was going to be close but ended up takeing about  2 ½ hours to get to.     And it was not really happening as it’s mostly a morning thing.  But we had some good food and some nice people were there (I had Oy) and we headed back following the river and looking for a campsite.   I had seen a nice one right near Bpu’s wat and we ended up going all the way back and finding it and setting up a nice camp along the river.

That night, Bpu came down with his friend who found a turtle and everybody thought that was pretty special and a big deal and immedietly Thum started brushing it with baby powder looking for a number to play the lottery.    Oh yeah, before that , I picked it up and it immediately shit and pissed on me!  They all said “wow, that’s really good luck”   I felt special.

In the morning, we had a leisurely camp breakfast with Simon building up the fire again and I walked up the road for coffee and we didn’t leave for about 3 hours.     Joe Sieck had called to say he wasn’t too far away although it seemed like about 200 miles.

Now, all pictures from this trip have been uploaded and can be seen online here.